Salvador Perez is a big person at 6'3" and 230 lbs. Perez's size has been mentioned as a possibility for him not being able to catch throughout his career. Generally, catchers are smaller in size. Using a comparable group of big catchers. I am going to look to see if Perez's size is a determent to having a long and successful catching career.

To put into perspective how uncommon catchers of Sal's play, here are the total games caught by catchers born after 1945 order by height.

Less than 20% of all games games are caught by catchers of Sal's height or taller.

Generally, I think the height values are correct (besides Tim Collins' 5'7"). Weight values are an entirely different matter. Most of the available weight values are from when the player entered the league and then are even on the low side. Like CC Sabathia only weighes 290 lbs. People will always lie about their weight and baseball players are not an exception. I looked at several of the players' weights I compared Perez to and the values seem comparable. The weight values were basically between 200 and 250 lbs. I will only be looking at height in my comparisons because of the problems with weight values. 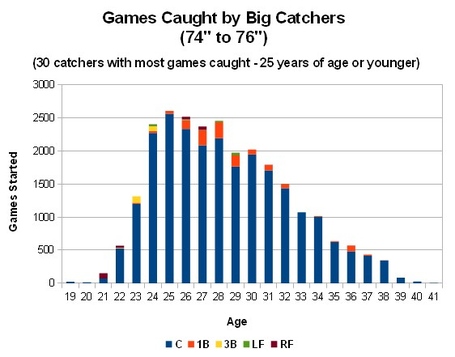 The peak age for games caught is 25-years-old. The drop off in number of games caught occured from age 28 to 29. It seems the Royals have Perez signed up during his peak seasons for playing time. Around age 26 is went some of the catchers are moved to 1B. Billy Butler will reach free agency under his current contract by the time Sal reaches age 26. It may be a good time to move him to DH or 1B depending on if Hosmer can begin producing.

Besides having his contract signed during his peak playing time years, his non-playing time components of RAR (runs above replacement) look to age the same as other MLB players. The math behind the curves is complex and is outlined at Beyond the Boxscore. I looked at all catchers within the height requirements (74" to 76") and compared how they aged to all players. Here is the graph: 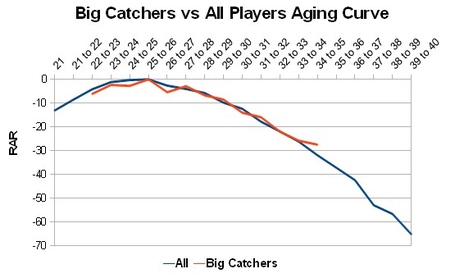 As with most players, the peak age for the big catchers is at ages 24 to 26. Sal looks to be a Royal during his most productive seasons.

While Salvador Perez may seem to be too big as a catcher, big catchers have succeeded in the past. Perez is signed as a Royal during his peak playing and production time frames. Perez's contract may end up being the best move Dayton Moore has made as a general manager.