Eric Hosmer and Scott Barry Argue Over the Strike Zone

Share All sharing options for: Eric Hosmer and Scott Barry Argue Over the Strike Zone

Last night in the 8th inning Eric Hosmer didn't think a pitch he took for strike 3 was in the strike zone. He argued a bit with home plate umpire Scott Barry. Neddy Yosty came out of the dugout to continue the discussion and eventually got tossed.

Here is an image of the called 3rd strike and the full video can also seen: 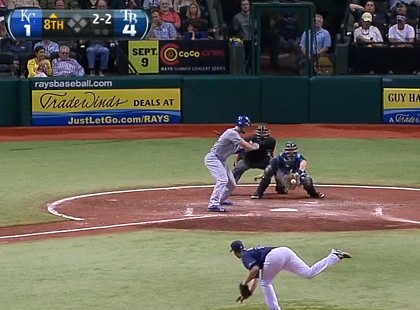 The ball looks a little low and outside.

In the past, Barry has been really borderline on calling that pitch a strike. Hear is a heat map of Barry's left-handed hitter strike zone with the pitch added the was called a strike.

The image is from the catcher's perspective and the scale is the percentage chance that a pitch will be either a called strike or ball. 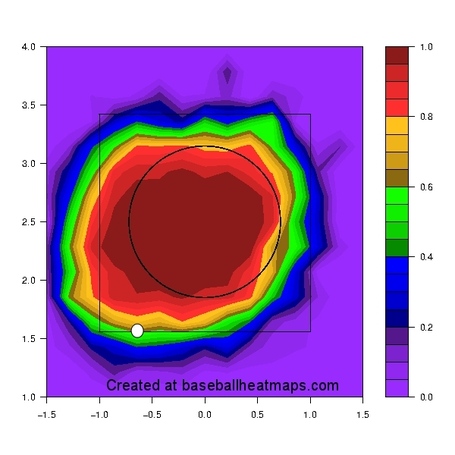 It is pretty much a coin flip if a pitch is called a ball or a strike in that part of the strike zone with Barry. Examining the raw numbers, 39% of all pitches within 3 inches of that pitch will be called a strike. The league average for all umpires is 40%. Barry isn't one of the rogue umpires with a ridiculous strike zone. He is average compared to the rest of the umpires.

Hosmer took a chance that the pitch would not be called a strike and was wrong. He may have been frustrated with the call, but it was not a call to argue over and possibly get kicked out of the game.