Hochevar is getting fixed, again. Connor pointed out that in Dutton's article in The Star that Eiland is trying to get Hochevar, to change, specically by throwing less cutters.

Hochevar admits he's hesitant to shelve his cutter while pointing out opponents are "only hitting about .170" when he throws it. But Eiland said the cutter creates bad habits for other pitches. ...."Use it sparingly," Eiland said. "For me, only five, six percent of his pitches should be cutters. Use it when you need it."

This shouldn't be too hard. PitchF/x has been tracking cutters separately from other fastballs since 2010. I matched the game results compared the % of times Luke threw a cutter. 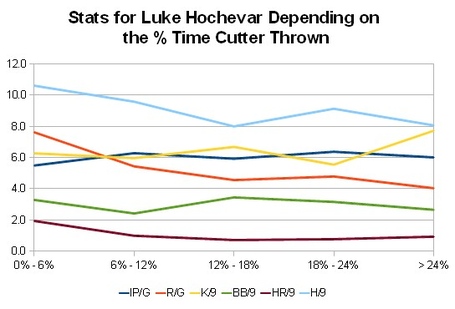 When he needs it. Dammit Eiland. It looks like if Luke Hochevar needs to throw it all the time. When he doesn't, teams knock the leather off the ball. Yea Luke, throw it less than 6% of the time and watch your ERA jump to over 7. Take that great advice from pitching coach.

Eiland goes on to say:

The deal is that the more Luke throws to the side, the better he pitches. At least Yost uses stats for his messed up decisions (scoring 1st leads to wins). So many problems exists with this team on the developmental pitching side. No long toss. Year and half Tommy John recoveries. Complete inability to draft and develop more than one major league starting pitcher. The more this team operates, the more they need a complete management enema.