We can never quit you.

After all, you were the number one overall draft pick. You were (allegedly) not chosen by Dayton Moore, but given the number of chances you've had in your career, it sure feels like it.

In Dutton's article, manager Ned Yost compares Luke Hochevar to former starters like Kevin Millwood and Jason Schmidt. Both guys started their careers slowly, yet turned things around Yost argued. Why not the same for Hochevar?

It's always nice to compare present players to guys from the past. It can give context. Except in this case, there really isn't any pre-existing context. Yost is just pulling names from a hat.

Millwood's best seasons came in his 20's. Schmidt waited until he was 30 to have his best season, but showed potential in his mid 20s when his ERA hovered around league average.

The point I take away from this graph is that Schmidt and Millwood both gave an indication at some point in their first five or six seasons that they would be better than average major league starters. They could find the consistency over the course of a six month season to put up solid numbers.

And that's what it's really been all about with Hochevar, right? Consistency. Let's look at his Game Scores from this season. 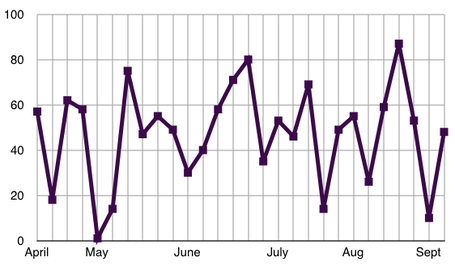 Every starter will have ups and downs. There isn't a single starter who will give you a straight, great line on a graph like this. Except Hochevar has some extreme plots. An 86 point divide between his best and worst starts. This looks like an EKG. And it gives me a heart attack.

I know the Royals are intent on bringing back Hochevar, who will be in his final second to last year of eligibility for arbitration. This is where smart teams cut bait. Under the arbitration system, Hochevar is becoming too expensive for the results he will give the Royals.

If we're going to compare Hochevar to past starting pitchers, why don't we have one that makes sense?

Why hello, Kyle Davies. These two aren't on the same career arc, but they've both been pretty awful. Both showed signs of improvement, but neither was able to harness their potential.

Yes, starting pitching is a problem. Yes, it is a priority entering the off season. Yes, it will cost money or prospects to bring in decent starters.

No, Hochevar is not a solution.