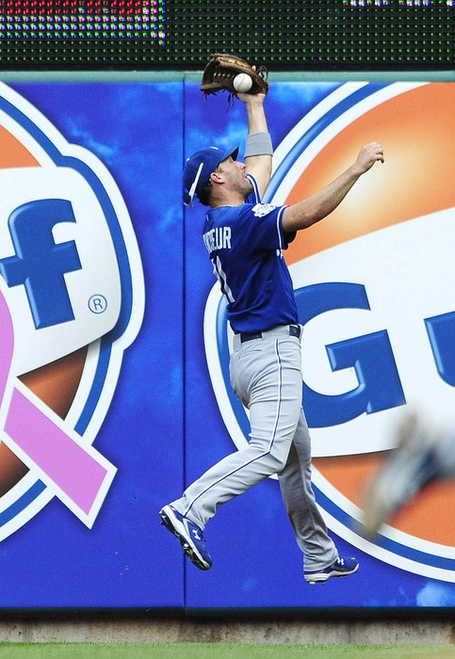 As a Royals Review community, we discussed Jeff Francoeur quite a bit last season. Our former fearless leader often lead the charge, penning quite a few articles with Frenchy as the subject. Whether it was discussing the inevitability of the Royals singing the former Atlanta outfielder, writing haiku's about his crazy eyes, or awarding him the coveted Royals Review Man of the Year award, Francoeur dominated this blog in 2011.

This season, however, Francoeur has faded from our collective consciousness. That's not to say RR has forgotten about Frenchy; click on any random game thread and you are bound to find people complaining about his inability to judge if a pitch will be a strike or a ball, or lambasting his ability to turn routine flyouts into extra-base hits over his head. As a subject of articles, however, Francoeur has stayed away from the spotlight, giving us a chance to discuss some of his other teammates. What a guy.

It's time for Frenchy, however, to get his due. Most people understand that Francoeur is having a bad season, but it can be difficult to grasp how truly historical Jeff Francoeur's 2012 campaign has been. It's easy to point out that at -1.9 fWAR, Fangraphs has the Royals right fielder as the worst position player this season (Michael Young has had the second worst season at -1.6 fWAR. Heh). Calling Frenchy's 2012 a bad season isn't giving this season it's proper historical context. Jeff Francoeur is currently in the midst of one of the worst seasons a position player has had in the past 60 years of baseball.

Here's a chart of the players with the lowest fWAR in the past 60 years of baseball, courtesy of Fangraphs.

First of all, there are a few too many familiar names on this list. The fact that the Royals have employed four players on this list in the past ten years, and three of the players at least spent part of their horrific season playing for the Royals probably tells you all you need to know about Royals recent history.

Back to the topic at hand: Francouer is currently in a tie for the 13th worst season in the past 60 years of baseball; with a few weeks left in the season, he could certainly vault into the top ten. As it currently stands, however, Francoeur's season of ineptitude is certainly impressive enough to stand on it's own.

For some context, the 13th best season in the past 60 years belongs to Willie Mays in 1964. That season, Mays boasted an impressive triple slash line: .296/.383/.607. That triple slash line was good for a wRC+ of 177, making Mays 77 percent better than the average hitter that season. Mays also gets credit for impressive defense that season, as Total Zone gives him credit for 17 runs saved above average. Put his entire season together, and Willie Mays accumulated an impressive 10.9 fWAR in 1964. Jeff Francouer: the Willie Mays of being horrible at baseball!

Frenchy has almost been as disastrous in all facets of the game this season as Mays was impressive in 1964. Stare at his .228/.287/.362 triple slash for too long, and you'll start to ponder self-lobotomy. Francouer's wRC+ of 68 is the worst out of any right fielder in baseball this season with enough at-bats to qualify for the batting title, and 32 percent below league average total. His -8.9 UZR indicates that he is playing the worst defense of his career, and for good measure, he has been worth -2.9 runs on the basepaths this season as well.

It takes a remarkable player to be this consistently awful at baseball, but Royals management deserves some credit from Royals fans for giving them the opportunity to witness history. After all, I'm sure there have been many players capable of posting -1.9 fWAR in a season, but those players tend to be benched, demoted or cut. To continue to play Jeff Francouer in spite of all the evidence that suggests he has been a terrible baseball player this season is truly remarkable and speaks volumes about the current front office.

So while all of us algolagnic Royals fans watch the end of the season to see if they play spoiler, or to find any faint wisps of hope to carry into next season, pay attention to Jeff Francoeur. Judging by the chart above, we may have to wait until 2017 to witness this abysmal of a season again.