Still abuzz from the events from the previous evening. I can't imagine how that buzz would feel had I actually been able to watch the game.

Anyway, we have another game set to get underway in just a few hours and the Royals will try to put another one over the Angels to destroy their hopes at October baseball. (Does it make me a bad person that I'm rooting against two of the biggest spenders in the game who happen to be from Los Angeles? I hope the Angels and the Dodgers miss the playoffs. I feel like I live in NorCal. I should at least be an honorary citizen.)

After watching the Salvador Perez fair pole bomb like it was the Zapruder film, thousands of thoughts filled by head. (That alone is rare. My mind has a capacity of just a few thoughts at a time. I almost had a headache.) One of which was, the guy is turning into some kind of bad ball hitter. He swings at roughly 39 percent of all balls out of the strike zone and makes contact on a mind-blowing 89 percent of those swings. He doesn't walk, but he doesn't strikeout and he routinely hits the ball pretty damn hard. I think we're all good for that combination.

Here's a snapshot from Gameday of his home run: 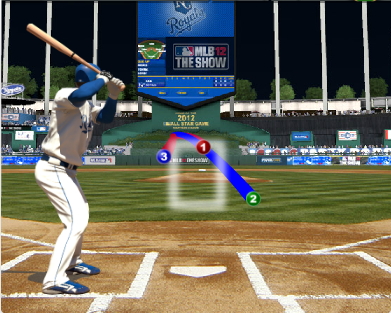 Pitch one is a fastball up. It looks like a meaty pitch and naturally, Perez swings. Foul ball. Pitch two is a slider running away. Taken for a ball. Pitch three, a 94 mph fastball. Well, you see where it's located. And Perez yanks it. Beautiful.

Have an excellent Sunday. The Game Thread will be online in a few.