Tonight the Royals begin a three-game series against the Chicago White Sox at Kauffman Stadium. The importance of this series varies greatly depending on which team you're rooting for. In order to simplify this, I've created a graph. 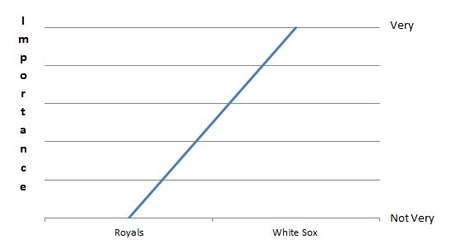 As you can see, there is a quantifiable difference shown in the importance placed on the game for each of the two teams involved. In fact, if one were to look at the game merely using objective analysis, it's likely each team would be best served if the Chicago White Sox won all three games. The White Sox could at least hold onto their three game lead and the Royals could likely improve their position in the first-year player draft. Baseball games as I've been told by many grumpy Baseball Men, is more than numbers. Whatever.

Still, the games will be played, both teams will try to win and some of us will watch. The interesting question is how did we get here? What can we see in the numbers (apologies Baseball Man) to lead us at least to the surface of what created the rift in the graph above?

If I was explaining this to my four-year old, I'd start with the fact that the White Sox have more wins than the Royals and sometimes it's helpful to start at the utter basics and try to move up the ladder. Simple arithmetic tells us that you can influence the outcome of your games in two distinct ways: score more runs and allow fewer runs. How do the two teams compare?

Simple I know, but still instructive. The White Sox turn their opponents offense into the Royals, while they score more than the Royals allow their own opponents. The White Sox do play in a better run scoring environment, but they're still outdoing the other team. The chasm between the way the teams score runs is what is most interesting.

At any gathering of Royals fans, the talk will turn to the pitching and how it's just not able to compete. When compared with the White Sox it is the offense which comes up the most short. I guess having the worst player in baseball in the lineup isn't the path to contention.

To Illustrate, here are a list of qualified position players ranked by fWAR for the two teams.

From a positional standpoint, the Royals match pretty well with the White Sox. They have the 1st,3rd, 5th and 6th ranked players. But the White Sox have more qualified players showing that they've likely had fewer injuries and a more stable roster. More importantly they have no negative WAR guys. That's not to say the White Sox are completely without negative WAR players, but they don't give them enough playing time to qualify. They're replaced, benched or used as backups. Interesting notion.

In order to win games, you have to do it against competition. Where have the wins and losses for each of these two teams come from?

Often, it seems that a Division winning team will get a lot of their wins against teams in their own division. These wins are often said to be "worth double". The White Sox have a winning record against the AL Central, but what they've actually done is completely dominate the AL West. The Royals are a respectable .500 within the division but show very poorly against the rest of the American League. I don't really think there are any conclusions to be drawn, but it is, at least to me an interesting look.

Another slice of the data is how the teams have done against quality competition.

The Royals have shown their mettle against the good teams, coming up equal to the White Sox in a significantly larger number of games. Of course they've shot themselves in the foot against losing teams with a .399 winning percentage in those games.

This means that this Royals series is even more important for the White Sox. They must continue to dominate lesser competition to clinch the division. A ton of words are written about the importance of the heavy-weight matchups of two contending teams. In fact, the work is done in the grind of the season in the games people "expect" a team to win. That's what is often the separator.

The Royals and White Sox face off tonight in a game which has serious implications for the post-season. And as the case has been for a long, long time it's not the Royals on the edge of their seats it's the opponent. An opponent who has been There before and is likely to be There again. A team which makes it's destiny by destroying the lesser amongst them with a potent offense.

The Royals may do what they've shown they can do all season - beat the good team. They'll do it with just enough hitting and pitching but then just when it seems they are world beaters. They stumble hard against the likes of themselves - other sub .500 teams. Is there a lesson to be learned here? I don't know. If there is maybe it's just "win more damn games so I don't have to write this article again". A lesson, which seems to miss it's mark. Either way we'll be watching and hoping to play spoilers once again.