Share All sharing options for: Grist For The Royal Rumor Mill: Carlos Villanueva

We all know the Royals are in desperate need for starting pitching. With the Royals on the Brink Of Elimination, why not light the Hot Stove:

The Royals are already showing interest in Blue Jays right-hander Carlos Villanueva, a pending free agent, according to the Toronto Sun... The acquisition of two starting pitchers is likely to be the Royals’ top off-season priority. Villanueva pitched for three seasons in Milwaukee under Royals manager Ned Yost.

Which begs the question: Who the hell is Carlos Villanueva?

Villanueva is one of those 'tweeners. He comes out of the bullpen, yet has four pitches so he'll make appearances in the rotation from time to time. As Dutton notes, he landed in the Jays rotation this summer when the entire province of Ontario landed on the disabled list. That's not the first time he's been pressed into emergency rotation service. Pretty much every time he's landed in the rotation has been due to an injury situation.

In his career, he's made as many as 64 appearances in a single season, but has never made more than 14 starts. He's thrown 118 innings this year, which is a career high.

Let's take a quick look at the pitches he throws and when he throws them. From Brooks Baseball: 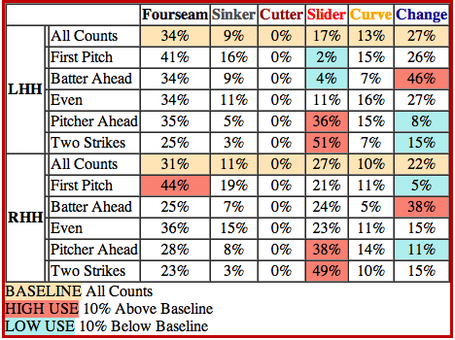 The percentages are from this year, but it's a fairly representative snapshot of how his career numbers look. He starts hitters off with a fastball and moves to the slider when he's ahead. He's ended more plate appearances with a slider than any other pitch and opponents are hitting just .153 with a .234 slugging percentage. It's his best pitch by far.

He moves to the change when he falls behind. Although a portion of the results are due to giving the advantage to hitters, that hasn't been a super-effective strategy. Five of the 13 home runs he's surrendered this year have come on change-ups and opponents are hitting .274 on that pitch. I'm sure he breaks that slider out of the zone so he's reluctant to throw it when he's behind, but his fastball and change-ups are such average pitches. For him to get hitters out, he has to rely on his slider and to a lesser extent, his curve.

When Villanueva pitched in Milwaukee for Ned Yost, he rarely threw his fastball, relying more on his slider. The Jays have had him throw more fastballs, but the results have been meh. He's a guy who averages in the high 80s with his fastball and in the low 80s with his change and slider. It looks like he throws a little faster when coming out of the bullpen, which is understandable. Injury-wise, he's been OK. He's had only one disabled list stint in his career. He has low mileage on his arm, but that's not saying much.

He's having good season (for him) so he's timed his entry to free agency with perfection. He's making around $2.75 million this year, but even with his year I can't envision him getting much of a raise. If any. That's probably what's making him attractive to the Royals right now. They see some upside at a bargain price. I'm skeptical. His success in 2012 is colored by a 81 percent strand rate and a .266 BABIP, which outpaces his career mark of .279. His 3.97 xFIP against a 3.42 ERA underlines this.

Is it a sound baseball decision to sign a guy who isn't really a starter? Who is a right-handed junk baller? I'm all for accumulating arms because, you know, they are the currency of baseball. You never know... He could provide a few quality turns through the rotation. And some innings as a middle reliever. But I think he belongs in the bullpen. His stuff isn't great and while he can sneak by with a .175/.236/.386 line the first time through the order as a starter, he loses the advantage the second time through with a line of ..276/.320/.440.

But if Villanueva is going to be one of our answers, we're asking the wrong questions.