It took a week, but we finally got to see Jake Odorizzi in action. (Well, you had to be at The K to actually see him in action, but that's another story.) Anyway, the Royals top pitching prospect made his major league debut on Sunday and for five innings, gave fans plenty to like.

The wheels fell off in the sixth, but that really shouldn't diminish what was a strong start for the young right-hander.

His final line on the day:

However you take your box scores these days, that line doesn't look great, but Odorizzi was really solid through his first five frames. There was a lot to like about his start.

Positive thoughts after the jump...

To my eye, Odorizzi did an excellent job hitting his location. His most effective plate appearances against the Indians were when he was hitting his fastball in one location (say, up and away) and then coming back with an offspeed pitch in another (say, down and in) to put the hitters away. This isn't groundbreaking, but it sure was nice seeing a Royal pitching prospect execute a gameplan.

The at bat against Ezequiel Carrera in the second is a great example. 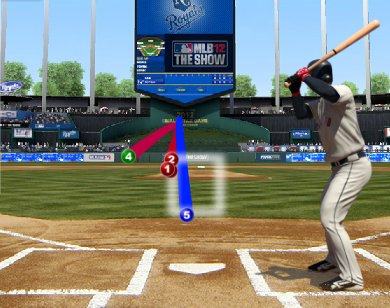 He kept all pitches up and away to jump ahead. With the count 0-2, he wasted a fastball in a similar location as his three previous pitches but further off the plate. A chase pitch, but Carrera didn't bite. At this point he had seen four pitches - all fastballs - in one general area - up and away. For the fifth pitch, Odorizzi featured a curve that was going to break on top of the plate. Carrera went down, tried to hold his swing, but checked it and hit a weak chopper up the middle. A really nice play from Odorizzi and he got the out.

It was just one plate appearance, but it was the kind of thing Odorizzi was able to accomplish throughout the first five innings.

Another takeaway: When he got ahead in the count, he didn't pull a Danny Duffy and nibble. Odorizzi attacked, like with Carrera. Take his strikeout of Jack Hannahan in the second. Three pitches... The first a fastball on the outer half taken for a strike. The second a change, swung at and fouled off. And the third pitch was a fastball that was perfectly located, to freeze the left-handed batter for strike three. 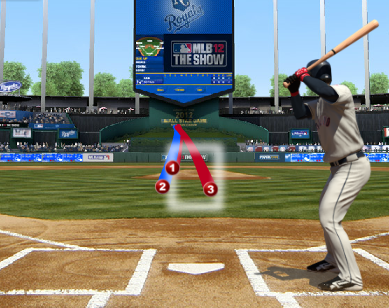 Throughout his minor league career, Odorizzi has been able to maintain his velocity in his starts. It was no different on Sunday. Here's Odorizzi's velocity chart from Brooks Baseball. 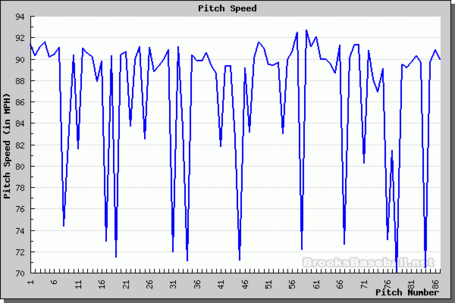 On the surface, there's a lot to like here. The low points in the chart are from his curve ball, which he threw 10 times on Sunday. It looks to the have the potential of being a good pitch for him, but it wasn't working in his first start. Of his 10 curves, he threw just four for strikes and three of them were put in play. Still, the idea that it comes in about 20 mph slower than his fastball is promising, he just needs to harness that slow power into pitches that hitters will swing and miss.

His most effective pitch on Sunday was his fastball. He threw it 62 times and picked up 43 strikes. And 28 of those strikes weren't put in play. He maintained his velocity throughout the afternoon and looked just as strong on his final pitch as he did on his first.

Now, about that sixth inning. Yes, it was the third time through the lineup, but those were some incredibly inviting pitches he offered to Indian hitters. The fastball to Santana... Belt high down the heart of the plate. Fat city, baby.

I wonder how much the inning before affected Odorizzi. It wasn't an easy frame to navigate as he needed 22 pitches to get three outs. And the only damage in that inning was a walk, but that came on a nine pitch plate appearance to Jack Hannahan. Then followed a seven pitch at bat for Ezequiel Carrera before he flied out to right. It wasn't exactly a high stress inning, but I wonder how much it took out of Odorizzi. Think about it... It had been something like 10 days since he last threw a competitive pitch. And we are at the end of the season. It wouldn't surprise me at all if there was some sort of rustiness/fatigue factor at play.

The inning was a fiasco, with triple, single, home run and a single to account for the damage before Odorizzi was lifted for the bullpen to destroy the rest of what had been a fine Sunday afternoon. The pitch to Kipnis for the triple was down in the zone - really not a bad spot for the pitch. But the other three hits Odorizzi surrendered were all on fat fastballs on the upper half of the zone to left-handed batters. Not the location you want to spot your 90 mph heater.

Still, I'm not going to let four hitters discount from what was a fine debut for Odorizii. It wasn't the result we were hoping for on Sunday, but it was a promising beginning.