Share All sharing options for: Game 155 Recap: Royals Maintain Integrity Of The Race, Fall To Tigers

At least we're preserving the integrity of the pennant race.

--- With an 0-5 night, the Eric Hosmer Death Spiral continues. He has four hits in his last 44 plate appearances dating back to September 13. Almost 40 percent of his outs have been groundouts. This does not look healthy:

(Courtesy of Brooks Baseball.) That doesn't include Wednesday's game, but still...

What makes this list even more amazing (as if that's possible) is that Perez has only played half a season. 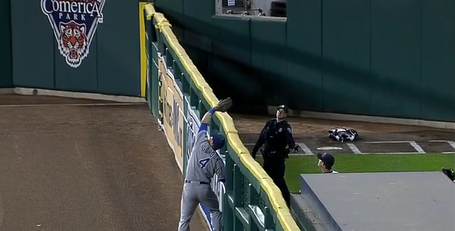 Saw a tweet from a Fielding Bible guy that the Cabrera shot was in the air for 6.7 seconds. That's crazy. Rainmaker.

--- I'm not entirely sure why Irving Falu put that ball in his pocket while trying to turn the double play in the pivotal eighth inning. It looked like he had time to get off the throw. And as Uncle Hud pointed out during the postgame, fundamentally Falu should have come across the base and taken the throw on the third base side of the bag. Good slide, though.