Mike Moustakas' Defense Is Up, Escobar's Defense Is Down or Is It. Fangraphs tracks a defensive measure called UZR. It takes the balls that are normally fielded by all players and then apply those values to each player individually. It tries to measure the number of plays and therefor runs the defender saves compared to the league average

Fangraphs tracks a defensive measure called UZR. It takes the balls that are normally fielded by all players and then apply those values to each player individually. It tries to measure the number of plays and therefore runs a defender saves compared to the league average

UZR assumes the defenders are positioned evenly. This season the Royals have been implementing more and more of an infield shift and Moustakas is moving into parts of the field that Escobar normally defends.

Here is an example of such a play from Wednesday night. 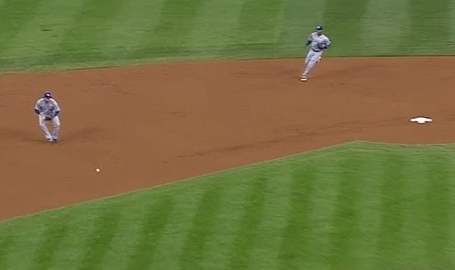 Moose is positioned about half way between 2B and 3B and makes a play on ball that Escobar would normally field.

(BIZ = Ball in defender's zone that are normally fielded)

As a group, the 2011 defenders were a bit better, but generally, the Royals are just getting to and making just as many outs on the left side of the infield. UZR's totals are within a point. Fielding % for balls in zone are within a couple of points.

Escobar's defense has not fallen off the planet this season. The planet has shifted a bit and he is not looking as good statically.

With all that defense talk of Escobar, I don't think he will ever be an elite defender until his glove work improves.

Hosmer Has Problems With Grounders

For the second year in a row, Hosmer is ranking near the last in the league in defense. After watching him more and more, grounders just tearing him up. Take this play from Wednesday night.

It was a ball almost hit right at him and he could not make the play (once he finally reacts). These types of plays are just too common with him.

Keep the Tag On the Runner

Too many times this season the Royals may have gotten a runner out if they would have kept their glove on the runner as they slid through the base. It happened Wendesday night. The runner eventually came around as the winning score.

This lack of detail used to drive Frank White crazy.