The Royals Are The New Kings Of Swing

Nine consecutive strikeouts highlight a series where the Royals whiffed at an epic rate.

Share All sharing options for: The Royals Are The New Kings Of Swing

Doug Fister pitches for the Detroit Tigers. Doug Fister has a career strikeout rate of 6.0 SO/9.

Doug Fister now owns the American League record for consecutive strikeouts in a single game by retiring nine Royals in a row on strikes. Six of them looking.

It was all part of a recent trend in this four game series where the Royals hitters went down faster than Lindsay Lohan on a Tuesday bender.

This blows my mind...

A 40:1 strikeout to walk ratio. Amazing.

That's awesome if you're a pitcher. Hitters... Not so much.

The fact that Fister set an AL record is amazing. The fact the last AL pitcher who whiffed eight in a row was Blake Stein is even more amazing. This season is getting more surreal every day.

Six of the nine strikeouts were called third strikes. According to the graphs from Brooks Baseball, home plate umpire Jeff Nelson wasn't expanding the zone. He was fairly consistent throughout the afternoon. 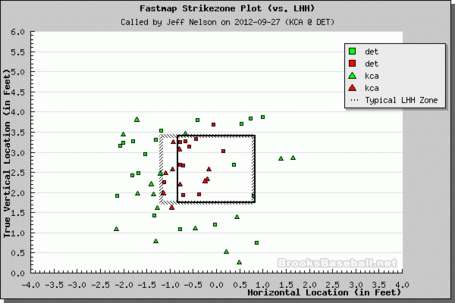 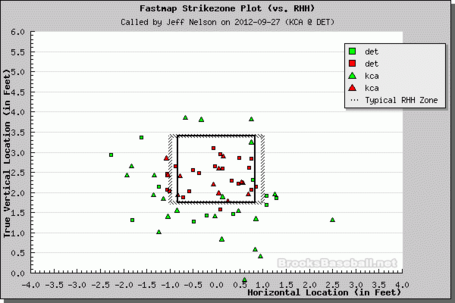 If you're not familiar with the umpire maps from Brooks Baseball, the plots represent only called pitches. The dashed line around the strike zone is the Fastmap, or the area where most pitches are normally called strikes. The green plots are balls and the red represents strikes. The squares are pitches thrown by Tiger pitchers and the triangles are pitches thrown by Royals pitchers.

Nelson was inside the Fastmaps for the most part. And he wasn't favoring Tiger pitching. Did Fister get some calls on the inside corner against right-handed batters? Yeah, they may have been on the edge, but his Royal counterparts failed to locate there with consistency. Or if they did, their pitches were swung at by Tiger batters so they're not represented here.

Now for the walks... We know the Royals are walkless wonders. Entering the Detroit series they had drawn 380 walks for the entire season. That was an average of 2.5 walks per game. Worst rate in baseball. By far.

So while the one walk in a four game series is pretty awful, it's not surprising, considering the team. End of the season, we're going nowhere... Hack away.

Looking at the roadkill of this week, you see two games where the Royals whiffed at least 10 times while failing to draw a walk. Seems kind of extreme, yet it's not that uncommon. According to Baseball Reference, it's happened 71 times this season. By doing it twice this week, it's now happened to the Royals five times this season. That's close, but not the worst. The Pirates have accomplished this on seven occasions.

But what's really strange about this stretch is the Royals have been the most difficult team to strikeout in baseball this year.

In the big picture, this doesn't mean anything. Four games isn't anything to base a conclusion upon. It's more strange... And shocking, even for the Royals, that they have put together a string of games like this.

After a 12 game losing streak to open the season, striking out 40 times against just one walk seems a fitting conclusion to a frustrating 2012.