In an off-season full of frustration and angst over the Royals' future, I figured this story might produce a few chuckles. There's no analysis or insight into the team's future, only a light-hearted look at how being a Royals fan produced an unexpected life achievement for me.

It began with a seed, the humble soybean, planted on our central Missouri vegetable farm in spring 2010. Fresh edamame were becoming a staple of our farmers market sales, and my wife & I planted many rows of them with the idealistic hope shared by baseball fans and farmers. This year will be really good, right? Of course, by mid-May the Royals were already well under .500, and excessive rainfall had yet again begun to accumulate for the 3rd year in a row, but idealism dies hard in the hearts of farmers and Royals fans (paired though it is with cynicism).

Edamame yields were good that year, and by late August I began planning my annual trip to the K for a birthday Royals game. It's a long drive for us, and baseball season maps almost perfectly onto our busiest working-7-days/week season, so live baseball is a rare treat. Little did we know that this year's game would end up giving me a cameo on Japanese national television a few years later.

So as a nice day dawned on Sunday, September 5, we headed west on the back roads leading to KC. Given our budget, and our acclimation to farm-fresh food, stadium food just doesn't work for us, so we packed a variety of our own edibles for the day. This included a large bag of freshly boiled edamame, an easy snacking treat so tasty that one local restaurant was using ours for bar snacks instead of peanuts. We enjoyed the game, a rare win in which Kyle Davies pitched well, Billy Butler led the offense, and Joakim Soria was his usual self. For fun, we took a quick photo of me displaying our edamame at the stadium, which we later posted on our farm's blog: 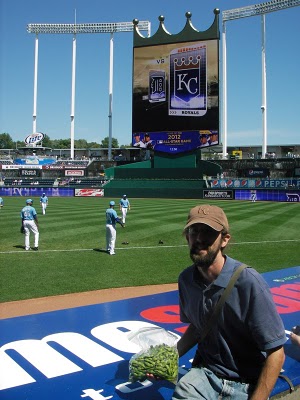 2011 went by, the farm did ok, the Royals didn't. 2012 got off to a miserable start and just turned worse, as the Royals continued to go nowhere and we struggled through a miserable heat wave and drought. We skipped the September birthday game for the first time in years. Yet later that fall, my wife was looking through our web stats when she found an odd Google-search reference: "stadium edamame". WTF? We'd pretty much forgotten about this photo.

A few days later, we received an email we initially took to be spam, supposedly from someone in NYC working for a Japanese TV production company putting together an educational program on edamame that would air on Japanese national television during Saturday evening prime time. They'd found our photo and wanted to purchase limited rights to use it, we assume to illustrate that Americans, too, like edamame and baseball. We did some research and some back-and-forth to ensure this person was real, though we were never fully convinced it wasn't a fishing scam until the check showed up on the mail one fine day.

So there it is, the Field of Dreams that apparently got me on Japanese TV as a Royals fan, though probably only for a few seconds. I don't know when the episode actually aired, as I don't speak Japanese and was unable to find an English-language site for the show or its reruns (if they're online at all). So keep heart, Royals fans: you never know what odd rewards your persevering loyalty will turn up. Now if only the team had a Japanese player I could ask...