Will the Royals offer the former Yankee starter a change of scenery?

The Royals need to fill a hole in their starting rotation with the departure of Ervin Santana. This isn't exactly a state secret. With the Hot Stove finally lit, it's not a surprise to hear the Royals connected with sundry free agent starting pitchers. They likely don't have the payroll flexibility to add a front line starter in what is a weak free agent class. (Think Ubaldo Jimenez, Hiroki Kuroda, Matt Garza and our own Erv.) That's probably a good thing as it will prevent the Royals from making a long-term mistake.

Instead, the Royals will be shopping in the bargain bin. Starters like Josh Johnson, Tim Hudson and Phil Hughes have been named as possibilities. As Connor noted on Monday, Jon Heyman brought up the Hughes/Dave Eiland connection and thought the Royals would be a good fit.

Hughes had a spotty track record as a starter for the Yankees. That's being kind. As Connor wrote, Hughes has league-average strikeout and walk rates, but is a fly ball pitcher. He allowed 59 home runs over the last two years, a 1.6 HR/9. As a right-handed fly ball pitcher, that's basically the worst profile for a Yankee starter. Of those home runs, 39 were sent into the jet stream in the Bronx.

Based on his performance from 2013 compared against the results of 2010 and 2012, it seems like there is some upside there. When taking those three seasons, the strikeout and walk rates are similar, but the divergence is in the aforementioned BABIP and strand rate.

Maybe Hughes is the classic "change of scenery" pitcher. He struggled last year in a walk year and it just kind of snowballed. I listened to a couple of his starts on the Yankee radio network and John Sterling spent most of the time suggesting Hughes would be better off away from the Bronx. Sometimes I wonder if Sterling actually watches the game, but when he is critical of someone on the Yankees, I found myself wondering if someone within the organization was feeding him Hughes talking points. Basically, by early summer the writing was on the wall that Hughes' time with New York was coming to an end.

Hughes is that free agent rarity in that he is in what should be his prime. Debuting as a 20 year old in 2007, Hughes turns 28 next June. It's sexy to compare Hughes to Gil Meche who also hit free agency while in his 20s, but I'm not buying.

Hughes throws a fastball that averages around 92 mph and can reach 95 mph. It's a pitch that doesn't have a ton of action to it and Hughes catches too much of the plate. Here is where he located his fastball last against LHB last summer: 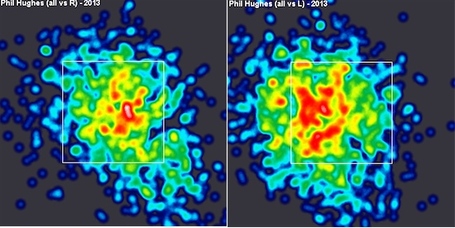 Hughes practically lives over the heart of the plate when he brings his fastball against right-handed batters. Are you surprised they hit .342 with a .582 slugging percentage against Hughes last year? After seeing that heat map, you shouldn't be. Next, look at his placement against lefties. He tries to work away - and is more successful working off the outer edge here than he is against right-handers - but it's still not enough.

The fastball isn't effective, but Hughes lacks the secondary pitches to overcome his sub-optimal heater. In the past, he featured a curve. However, last summer he mostly scrapped the curve in favor of a slider. It became his best pitch against right-handed hitters. He also tried to throw it against lefties, but it was less successful.

Hughes completely lacks a change. Think Wade Davis here. Hughes will throw it to left-handers from time to time, usually when he fell behind in the count, but they tattooed his change to the tune of a .355 average and a .615 slugging percentage. It's an interesting approach, throwing his worst pitch in a less than ideal situation. When you lack a full arsenal, you're limited in what you can bring.

With a spotty injury history - including back issues - Hughes has thrown more than 100 pitches in a season only three times and has never topped 200 innings. A year removed for a goal of 1,000 innings from their starting rotation, it would seem to signal a reversal of course to grab a guy who isn't exactly a workhorse. (Although it's worth mentioning it's usually all about narrative in those types of stories. If the narrative isn't there, it won't be mentioned.)

The industry consensus has Hughes looking at a one-year deal to establish his value going forward. I can see a few one year offers in his future, but I can also see a team or two desperate enough, and intrigued enough by whatever remains of his upside, to offer two years. Edwin Jackson had a better recent track record entering free agency ahead of his age 28 season and signed a one-year, $11 million contract with Washington. Adjusting for inflation and skill level, it's not difficult to see Hughes with a $10 - $12 million deal next year. That seems like the proper neighborhood for a 1.6 - 2.0 fWAR season.

Comparisons to Jackson and Meche aside, Hughes reminds me more of another pitcher I mentioned previously - Wade Davis. Hughes lacks the full compliment of pitches to be a successful starter, particularly the change-up. He's had some success in the bullpen for the Yankees. To me, that's where his future can be found. Obviously, Hughes wants to stay in the rotation - that's where the money is - but I think if a team is foolish enough to sign him to a deal longer than a year, they're going to have a grossly overpaid bullpen arm on their roster. Everything I see says his strength is pitching in relief.

Yet some team will buy into the change of scenery narrative and will sign Hughes to be a starter. Is he a fit for Kansas City? The Royals will field a good defense and they play in a park that will help reduce Hughes' lofty home run rate. We can also expect his BABIP and strand rate to fall back into line with his career numbers. There is certainly potential for a rebound. I think Hughes is a better pitcher than he showed in 2013, and would be an OK gamble on a one-year deal where the risk is limited. I certainly wouldn't go for a contract longer than a single year. By 2015, we'll be writing about Hughes as an overpaid set-up man.