It could be worse, a lot worse

Signed: A 4 year contract for $32 million which works out to $8M a year. One key to this signing, compared to some other starting pitchers, no draft pick compensation will be attached. With the current cost of WAR on the free agent market around $6M to $7M, Vargas needs to produce between 4.5 and 5.5 WAR over the length of the contract to make it worth while. It could happen.

Past performance: Here are his previous 4 seasons worth of stats along with his 2014 Steamer Projections.

There is a lot to digest, but let's begin to break it down. His strikeout and walk numbers are both on the spectrum's low end. Pitchers who put up compare production this past season are Scott Feldman, Wade Miley and Travis Wood. Not exactly All-Star caliber pitchers.

Last season, his fastball was losing velocity until he went on the DL for the blood clot. 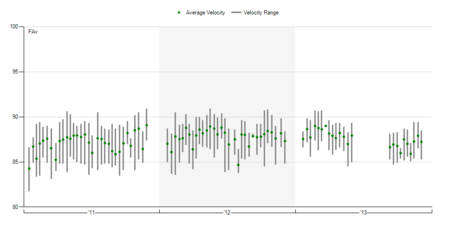 After he returned, his pitch speeds all stabilized at a new lower values.

For a look at some of his pitchers, here is a video of his second to last 2013 start.

Conclusion: The Royals got themselves a known commodity which should be able to eat innings at or below the league average. He is not going to set the world on fire, but he will be a nice 3 to 5 starter to help stabilize the 2014 rotation.