What to Expect from Norichika Aoki

Share All sharing options for: What to Expect from Norichika Aoki

Norichika Aoki was just traded to the Royals in exchange for left-handed pitcher, Will Smith. Here a breakdown on what to expect from Aoki.

He throws right-handed, but bats left-handed.

His swing is similar to Johnny Damon's and Ichiro Suzuki's. Both had some power, but slap and bloop hits were their main weapon. Aoki's swings creates a batted ball mix almost identical to Ichiro's. To get an idea of his swing, here is a sampling of Aoki's hits.

While Ichiro was more productive over the seasons, Aoki's results were comparable to Damon using wRC+. For some more recent Aoki comparables, I found Jose Reyes, Martin Prado, Jon Jay and Michael Brantley all produce close to what Aoki did over the past two seasons. Each had a near .300 AVG, some power and the ability to swipe some bases.

As for projections, here are two available at Fangraphs.com. I have included his career numbers for reference:

His projections are not much different than his career values.

The one nice aspect of Aoki's game is the ability to take a walk (7.8% BB%). His walk rate is similar to the ones put up by Gordon, Hosmer and Cain. He has a great eye and swings at pitches out of the strike zone 8% points less than the league average.

Additionally, he rarely strikes outs (7.5%). When he swing at a pitch, he usually always makes contact. The league average contact percentage is around 80% while Aoki is around 90%. His 1.03 BB/K is the 2nd highest value over the past two season behind Edwin Encarnacion (min 800 PA).

As for pitchers attacking hime, they usually try to pitch him away 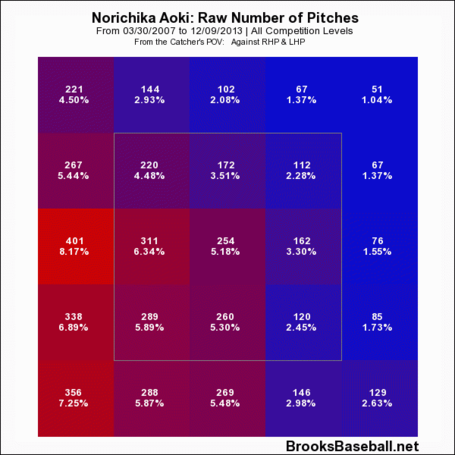 Which makes sense because Aoki is more successful with pitches up and in. 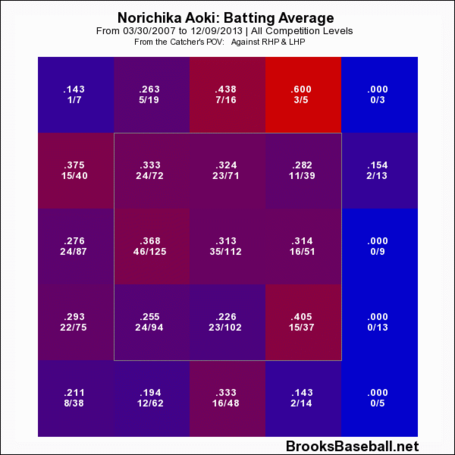 From what I saw on his defensive "highlights", he isn't great at fielding. His off footwork looks to be a little rough in the videos I watched. Additionally, he looks to play fairly deep in the right field. Here are few plays he made last season.

The Fan Scouting Report has Aoki as ranked similar to Lough.

Both are decent, but not great athletes. Lough looks to have the stronger arm and Aoki's arm looks to be more accurate.

On to his defensive numbers (Def+Pos)

The numbers have him as an average to below average defender. Taking my eyes, other people's eyes and the numbers, the average fielder label seems about right.

The 32-year-old Aoki uses solid slap hitting and a great eye to produce offensively at an above average level. Additionally, his defense and base running are also both near average. The Royals got them an average right-fielder which will always be a better alternative than Jeff Francoeur.