I have yet to have chance to write on the Infante signing. First, I really like it. Four years was a bit long, but for $30M, it can be tolerable.

I decided to go back at look at comparable 2B and how they age. I looked at 2B who had between 6.1 and 10.1 WAR combined from their age 29 to 31 seasons since 1980. Then I looked at their performance the next 4 seasons.

I ended up with 19 players in all and here they are:

Considering each WAR cost between $6M and $7M now, he will probably break even with 4 to 5 WAR. The average was 4.7 WAR with the median value at 4.3 WAR. There is at least a chance of the deal working out.

FanGraphs is keeping track of the preseason talent levels on each team and in the free agent pool. I like the FanGraphs method of showing how much WAR is expected from each position. Currently, the Royals are projected to be the 5th most talented team in the league if the season started now. The ranking will continue to change as the last free agents, especially the starting pitchers, sign.

A few days ago I ran a fairly controversial piece on hitter aging at FanGraphs. Basically, I found hitters no longer improve once they reach the majors, instead their produce the same and then begin to decline between their age 25-26 seasons. 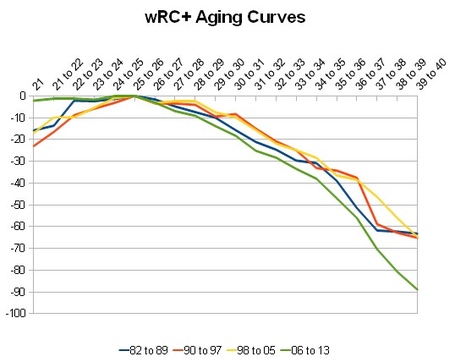 While every player doesn't even come close to matching the curves, similarities can be seen with Alex Gordon and Billy Butler as they begin to decline. Here is the pair's change in wRC+ (link to explaination of wRC+). 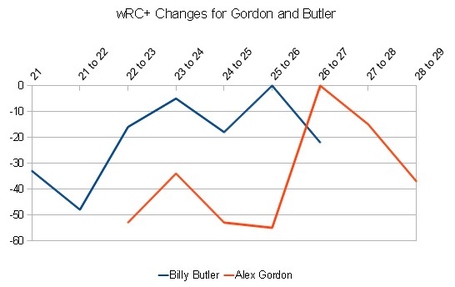 First, the Billy Butler has not really improved the past four seasons. I know people expected him turn into a true power hitter. Instead, he remained the same. After Alex's insane 2011 season (140 wRC+), his production has dropped as most hitters have done historically.

The Royals are looking to solidify their 2013 AL bunt title in 2014 with the acquisition of Aoki. With Aoki, the Royals have 4 of the top 21 bunt happy players from 2013.

A section of right-field seats was named the French Quarter because Jeff Francouer unfortunately defended there for a couple years. When, he was let go last year, the area changed names to GordoNation even though Gordon plays in left-field. Norichika Aoki will primarily playing right field in 2014, so assume the Royals are going to change section after Aoki (I personally don't think they will).What would you name the new GordoNation to?