Time to run some salary numbers to see how the Royals stack up less than two months from spring training. First, let's start with what we know. The guaranteed contracts.

All numbers above are from Cot's.

A couple of things stand out above:

-- Guthrie is the second highest paid Royal? Umm, that doesn't quite inspire confidence that the team is being fiscally intelligent.
-- Perez at $1.5 million remains one of baseball's best bargains.
-- The Aoki contract looks like it has potential to likewise be a great bargain.

The Infante contract is interesting in that it's a little backloaded. He's due $5 million next summer. Then, it jumps.

At a minimum, Infante is due $30.25 million. Which we knew shortly after the deal was announced. The salary breakdown came out late on Tuesday. I'm going to assume the option isn't picked up (or he's traded - either scenario seems more plausible to me than the Royals paying Infante $10 million in '18), so the AAV of his deal remains roughly $7.56 million.

This is the second consecutive winter Dayton Moore has structured a contract in this manner. Last year remember, Guthrie made $5 million. It's an interesting way to structure payroll when it comes to dealing with free agents. Convince a player to take a low initial year, backload the deal and then deal with the increases when they come. Guthrie takes Ervin Santana's place in the payroll structure while Vargas fills the Guthrie portion of the budget.

Now, to the arbitration eligibles. Each ^ next to a name represents the number of years that player has been eligible.

The above numbers are estimates from MLB Trade Rumors.

That's 18 players who have a signed contract in hand or are arbitration eligible. The estimated total for those 18 is $89.2 million. That's kind of a big deal. Last year's Opening Day payroll was $81,871,725. A record amount, surpassing the 2010 payroll.

For a refresher, here's how past Opening Day payrolls have looked for the Royals: 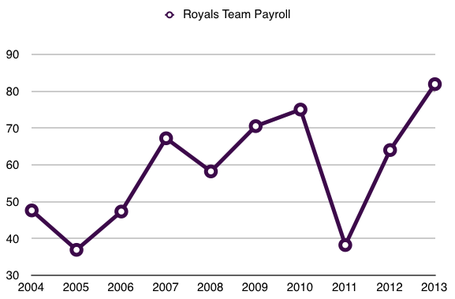 Remember how Moore said he thought 2014 payroll would be "about the same?" I didn't put much stock in his comment at the time. I seem to remember him saying something similar at the end of 2012 and look at the graph above to see how accurate that statement was. My gut tells me Infante is the last big move of this winter. Sorry Erv fanboys (and girls), he's not coming back next year.

That pushes my estimate of total