Why Not Luis Mendoza As The Fifth Starter?

Can Luis Mendoza work his way into the competition for the fifth starter role?

Share All sharing options for: Why Not Luis Mendoza As The Fifth Starter?

This spring - like the last one - promises to be devoid of drama. Aside from some ginned up competition at second base (if you don't think Chris Getz isn't a fait accompli, you haven't been paying attention) pretty much all that's left to decide are the back of the bullpen spots.

However, there does seem to be a battle brewing for the fifth spot in the Royals rotation. Conventional wisdom has Luke Hochevar and Bruce Chen staging some sort of MMA death match for the right. There are a number of reasons for this, with the amount of cash the Royals have committed to both looming as the primary factor as to their place in this competition. (I disagree with Bob Dutton on this point who says cost is irrelevant. I just can't see the Royals keeping two pitchers for long relief who will each pocket around $4.5 million next summer. Yet another example of how Dayton Moore grapples with assembling a coherent and effective roster.)

So as Hochevar is spinning, looking for new corners to turn, and while Chen is angling for a call to the WBC, it seems we're leaving out another candidate - Luis Mendoza.

Mendoza was surprisingly effective last year. With an ERA- of 103, a 4.36 xFIP and 1.8 fWAR (not to mention a magnificent head of hair), Mendoza was probably the Royals second best starter behind mid-season acquisition Jeremy Guthrie. The Royals brain trust remains unconvinced. Heading into camp, the word is they prefer Mendoza as a long reliever.

Given the competition for the fifth spot in the rotation, does that make sense?

Let's take a look at Mendoza and his surprising 2012 performance. Mendoza has always been a sinkerball pitcher, with the caveat that his sinker just isn't that good. It's an easy pitch to hit, and opposing batters have had little issue making quality contact. Like most sinkerballers, Mendoza is a ground ball pitcher. Yet, those ground balls have eyes and can get through the infield. He's always had a high BABIP and allows more than his share of baserunners. This has been true in his limited big league looks and his time in Triple-A - with his 2011 season in Omaha the exception.

Along with the sinker, Mendoza features a traditional fastball and a curve. He will mix in a change from time to time, but for the most part, Mendoza is a three pitch pitcher.

As a starter in the majors last year, Mendoza liked to start batters off with his sinker. Not surprising as that's been his calling card for his entire professional career. It's generally a better pitch against right-handed batters as it tends to stay on the inner half of the plate. In plate appearances resolved with a sinker, right-handed batters hit .290 with a .426 slugging percentage. By comparison, lefties hit .416 with a .549 slugging percentage against him last year.

And as you would expect, the sinker was a strong ground ball pitch. He got a grounder 57 percent of the time from hitters on both sides of the plate. Yet, I suppose lefties were able to hit the ball with more authority as they clearly held the advantage against his sinker.

Mendoza's most effective pitch last season was his curve. He went to it when he was ahead in the count to left handed batters 31 percent of the time. When he had them down two strikes, he threw his curve to lefties 44 percent.

Naturally, for the right-handed Mendoza, the curve breaks down and in to the left-handed batter. It's more effective against the right-handed hitter going down and away. It makes sense he featured his curve more frequently to righties, throwing it 45 percent of the time when he was ahead in the count and a whopping 61 percent when he had two strikes on them.

As Mendoza pitched deeper into games, he turned to his curve with greater frequency. From Brooks Baseball, here is a chart illustrating his percentage of pitches by inning. Notice the uptick in his curve starting in the sixth inning. 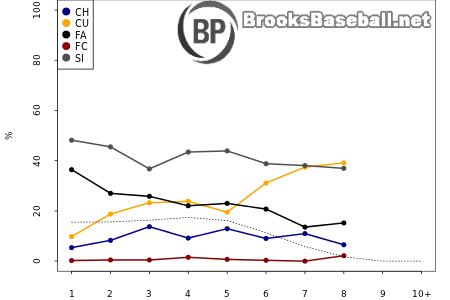 The reliance on the curve deep in the game allowed him to pitch into the latter innings of his starts. The results are interesting. The next table reveals that while hitters improved the second time they saw Mendoza in his starts, they didn't leverage any kind of further advantage seeing him an additional time.

Provided by Baseball-Reference.com: View Original Table
Generated 2/5/2013.
With two pedestrian pitches and one above average pitch, the results seem to position Mendoza as ideal fifth starter fodder. At a minimum, he should be in the mix with Hochevar and Chen. Should the competition truly be thrown open, ZiPS calls this a dead heat. It projects all three competitors to clock in with a 122 ERA- with ERAs of 5.02 (Mendoza), 5.03 (Chen) and 5.06 (Hochevar). (Just for fun, Ervin Santana is also projected to have an ERA- of 122 and an ERA of 5.05. And he’s slotted for either the number two or number three spot in the rotation. Excellent.)
Yost has been jonesing for Mendoza in the bullpen for almost a year, conveniently ignoring the fact that Mendoza was league average as a starter. He spent most of last May in the pen, and only joined the rotation as a matter of necessity. It seems with the Royals improved rotation for 2013, that makes Mendoza one of the odd men out. Not that he would be appreciably better than his competition, it's a shame the Royals don't seem open to giving him a fair shot.
Ultimately, the whole fifth starter debate will hopefully be rendered moot. Danny Duffy and Felipe Paulino are rehabbing from Tommy John surgery. Duffy has said he's throwing up to 120 feet. While it's foolish for the Royals to count on either one to make a meaningful contribution to the 2013 rotation, one or both will be ready and will need to pitch out of the back of the rotation. In an ideal situation, that would push the fifth starter to the bullpen. Although why do I have a feeling Santana will be the one kicked to the curb?
I guess as long as it's anyone but Hochevar. Right?