Deconstructing The Battle For Fifth

Both Bruce Chen and Luke Hochevar presented their respective cases for why they should be in the rotation. Using PitchF/X, we look at the evidence they presented from the mound.

Share All sharing options for: Deconstructing The Battle For Fifth

It's super nice that Ned Yost is pitching Bruce Chen and Luke Hochevar in the same games. Since they're both competing for the fifth starter role and all that.

I'm on Team Mendoza, but we all know how that is going to turn out - early returns have him as a lock for the long relief role. So let's take PitchF/X and look at how Chen and Hochevar fared on Tuesday afternoon.

-- Chen threw 44 pitches in his three innings of work, but managed to get only a pair of misses on swings. 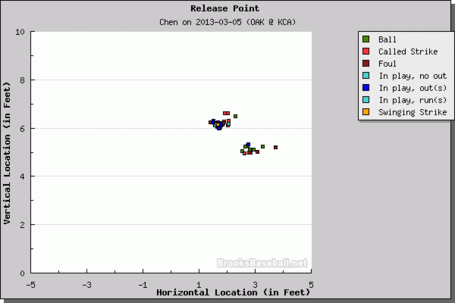 Prior to 2012, I thought that was a key to his success as a starter. He was dropping his arm slot for his sinker and occasionally for his curve which gave him the deception needed to get batters out. Last year, the deception wasn't there. Maybe hitters knew what was coming and were able to wait and identify the sinker or the curve when he dropped his slot. Possible, although I don't know why if that was the case it didn't happen sooner.

-- Hochevar said he felt better about his fastball execution. According to PitchF/X, he threw his fastball 35 times out of 56 total pitches, averaging 94 mph. Over the last three seasons, Hochevar has been fairly consistent with his fastball velocity, on averaging clocking in around the 92-93 mph range. I'm going to guess the gun at Surprise was running a little warm.

-- No matter how hot or cold the radar was in Surprise, Hochevar's fastball lost a little hop in that final inning of work. From Brooks Baseball, his velocity chart from Tuesday: 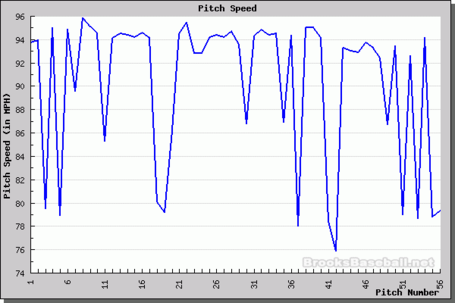 Interesting that his third inning of work started on pitch number 42. All of his fastballs were a tick slower from that point forward.

While it may be interesting, there's nothing to read in this. It's Hochevar's second start of the spring. He's working to get in game shape and that means building his arm strength.

-- Both of Chen's strikeouts were called and on sinkers. His second strikeout was an eight pitch at bat against Daric Barton to close out his third and final inning of the afternoon.

-- Hochevar also was pleased with how he was able to keep the ball down in the strike zone. I'm not too sure about that. This is his inside/outside chart from Brooks Baseball: 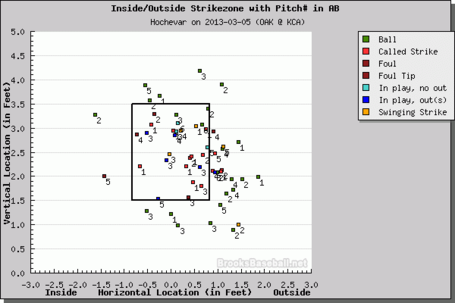 He spent most of the afternoon working away from the hitters. Yes, he did keep the ball down, but there were also plenty of meaty pitches in there. Overall, it appears he was trying to stay low and away from the majority of the hitters.

- Hochevar struck out the side in the sixth, his final inning of work. He got Josh Donaldson on a sinker that was caught on a foul tip. Then froze Hiroyuki Nakajima with a 79 mph curve. He showed that same curve to Michael Choice who swung and missed for the third strike.

-- Still can't get over the fact Hochevar needed 56 pitches to get through his three innings of work. The economy of pitches should play a role in who gets the fifth starter role. Yes, the new rotation means the I-29 Parade of Bullpen Arms should be a little less frequent, but having a fifth starter who doesn't average almost 20 pitches per inning would help ease any potential stress.

I'd like to reach a conclusion, but I'm too close to the dirt data. There isn't anything Hochevar can do to convince me he's worth of a role in the rotation. Chen, despite allowing the run yesterday, appeared to locate the ball better, but I'm not sure that gives him an advantage at this point in the spring.