Game one is in the books and sad to say the Royals won't be going undefeated this season. However, the pennant is still in our sights. Good news.

While the Royals loss is an Opening Day bummer, I always enjoy when the promised pitching duel actually materializes. James Shields and Chris Sale both delivered the goods on a cold Monday afternoon on the South Side of Chicago.

Shields went six innings and gave up eight hits. He had excellent control, walking none and striking out six. Shields found himself in a bit of a jam in the second, allowing back to back singles with one out. He got out of trouble, but velocity-wise, he wasn't the same pitcher. From Brooks Baseball, here's his velocity graph from Opening Day: 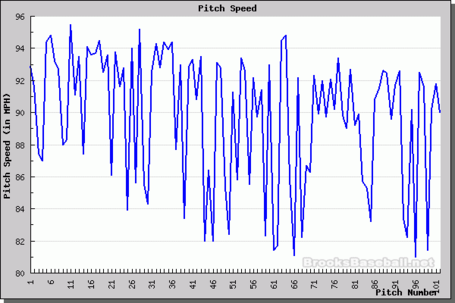 He threw 37 pitches in the first two innings. I think you can see where he velocity dropped.

The loss in velocity in his fastball was consistent with a drop of velocity with this off speed pitches. That's why he remained effective through his six innings.

-- Twelve of his 16 changes were strikes, with four of those strikes on swings and misses.

-- The home run to Flowers was on a fat 2-2 change that was right in the kitchen.

-- Salvador Perez just ripped the first pitch he saw from Sale. Upper half that hit of the wall. He hit it so hard, he barely rounded first before the ball was back on the infield. I'll take it.

-- Sale needed 102 pitches to just fall short of eight complete innings. Same old Royals? Perhaps. But Sale was absolutely on his game. Alex Gordon had solid plate appearances, but only had a walk to show for his efforts. He saw 19 pitches on the afternoon.

These two teams take a breather tomorrow and return with another day game on Wednesday.