Going further down the rabbit hole.

In the second part of the series, I'm going to explore what are the main culprits to these issues. By using Jeff Zimmerman's website baseballheatmaps.com, I believe I have identified the two biggest areas that Perez could improve upon. First of all, I think Perez should be more aggressive early in the count; Perez hardly ever swings at the first pitch, regardless of location. Second, I think Perez has issues recognizing sliders, specifically from right-handed starters. I think improvement in these areas will allow Perez to become an elite major league catcher.

The heat map below is a batter swinging strike zone heat map for Perez on 0-0 counts against right-handed pitchers. 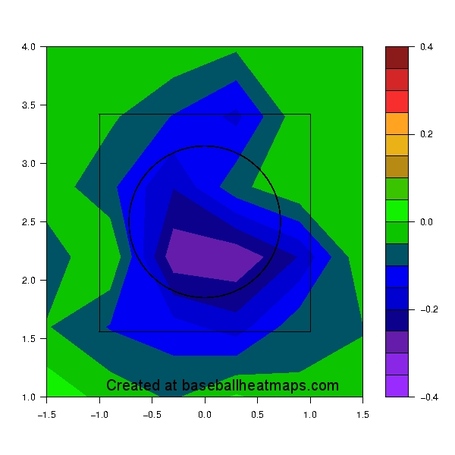 Remember these heat maps are compared to league average. Hitters generally do not swing at the first pitch, but they will if it is over the heart of the plate. Perez does not even swing at those pitches on an 0-0 count, taking up 40 percent more first pitch strikes in the middle third of the strike zone than an average hitter.

Some might argue that Perez should continue taking these pitches. The young catcher already does not see a lot of pitches at the plate, and if he starts swinging more on the first pitch, his hacktastic ways might spiral out of control.

I would argue that against right-handed pitching Perez should be swinging at these pitches, because there is a very high chance that it will be the best pitch he sees during the plate appearance. Perez should be able to take any pitch thrown down the middle for a ride, forcing pitchers to respect him more. If I were planning a gameplan to face Perez, I would tell my pitchers to go ahead and groove the first pitch. Perez is unlikely to swing regardless of location, and will be down 0-1. Given his tendency to chase pitches outside, it's likely that the pitcher would not have to throw another strike the rest of the at-bat.

Right-handed pitchers who throw sliders should feel especially confident against Perez, as he has struggled making contact against sliders and choosing which sliders to swing at.

The following heat map is a run-value map against sliders: 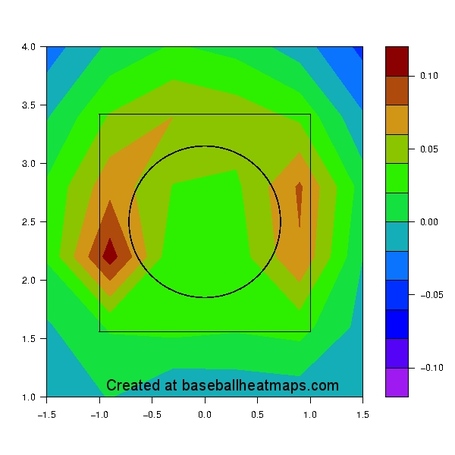 Unsurprisingly, Perez crushes sliders left up in the strike zone. He is especially effective hitting sliders on the inside part of the plate, which is his sweet spot against all pitches. With his excellent contact skills, Perez can reach the slider on the outside corner, but it is a hard pitch to hit for power.

Perez does not swing at enough sliders in his wheelhouse, and chases far too many out of the strike zone and away from the plate. The following heat map shows the sliders he chooses to swing at against right-handed pitchers: 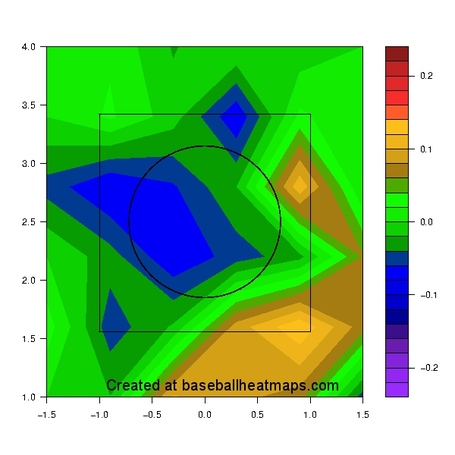 Perez takes quite a few sliders up and over the middle of the plate and on the inside part of the strike zone. These are pitches that he should be jumping at, not taking for strikes. Perez also chases too many sliders low and away, many of them outside of the strike zone.

A right-handed pitcher with a strong slider should have a fairly simple blueprint to attack Perez and limit his offensive potential. Start the at-bat with a strike, since you are fairly confident that he will take it, then work him down and away until he chases a bad pitch.

I would like to re-emphasize that Perez will still likely be a valuable player even if he makes relatively few changes to his approach at the plate. I do think pitchers will continue to adjust Perez as more teams respect his ability at the plate, and will start to exploit his weaknesses better. Without adjusting his plate approach, I believe Perez has a limited offensive ceiling.

The good news is Perez does not need to radically change his approach at the plate; he can still be an aggressive free-swinger, but start swinging at pitches that he is more likely to drive. Milwaukee Brewers third baseman Aramis Ramirez has had quite a bit of success at the major league-level. Like Perez, Ramirez walks a below-average amount, but makes above-average contact and posts below-average strikeout rates.

Ramirez is also successful against pitches on the inside part of the plate. Below is his run value heat map: 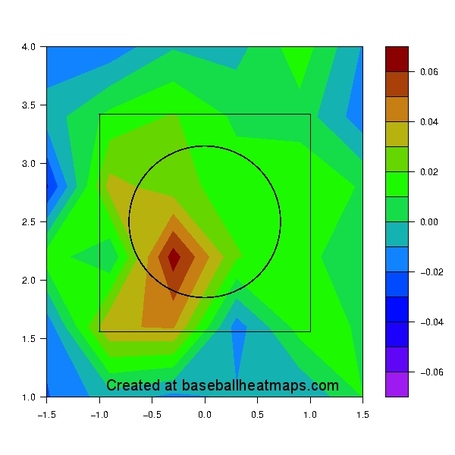 Ramirez has had success on pitches on the inner third of the plate, although he clubs pitches more that are left over the middle. He also makes contact against outside pitches, but doesn't drive the ball as well. 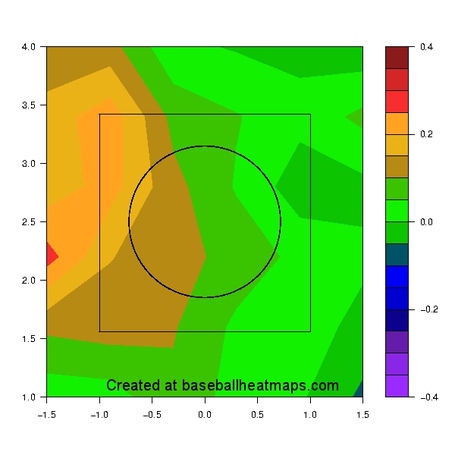 Ramirez has consistently been 30 percent as a hitter than league average since 2004. I believe if Perez starts to change his plate approach to reflect the optimally aggressive approach that Ramirez uses, he could approach that level of offensive consistency. Combine above-average hitting with his strong defense behind the plate, and Perez could provide some serious value to the Royals during his prime seasons.

There are a lot of reasons for Royals fans to be excited about Salvador Perez. The catcher has had success at the major league level at a young age, and is under an incredibly team friendly contract until 2019. There are still areas in his game, specifically his plate approach, that I hope he improves on during his career in Kansas City. By swinging at more pitches that he hits well and taking more pitches that he struggles against, he can improve as a hitter and fulfill the promise that people see in him.