Instead of revisiting the inaugural game at Royals Stadium - played on this date 40 years ago - I thought I would share a little about the development and the process that was behind the Truman Sports Complex.

My grandfather (the man who got me hooked on baseball and the Royals) had several reports and renderings of the various stadium proposals made by Jackson County in the late 1960's. It's an interesting look at the evolution of the Complex. (There are plenty of photos embedded in this post and some of the details are small. Click on them to open in a new window at full size.)

In 1966, Jackson County commissioned a report on the feasibility of constructing a new stadium in Kansas City. The Athletics played in Municipal Stadium, shared with the Kansas City Chiefs of the AFL. Built in 1923, the stadium went through several expansions. In 1966, capacity for baseball was 32,560 which was 7,500 fewer seats than promised to the American League when the A's relocated from Philadelphia. It had inadequate parking, was difficult to reach with access to only one interstate eight blocks to the north, concessions were substandard and offices for the team were tiny - with the Chiefs headquartering in Swope Park.

There was a very real fear that one or both of the teams could relocate. The report cited the "progressive" city of Atlanta, that built a multi-purpose stadium and then attracted a baseball and football team. These new stadia were all the rage with the Astrodome leading the way. Kansas City and Jackson County wanted to stake their ground. This is what they proposed: 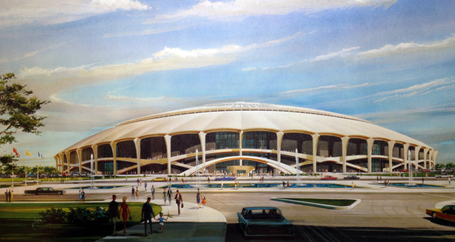 The dome was to contain 49,000 fixed seats with movable stands and bleachers to provide a total capacity of 60,000. Seating for baseball would be 56,000.

Two sites were discussed. First was the Core Business District (CBD) otherwise known as downtown. Here's were they proposed the dome would sit: 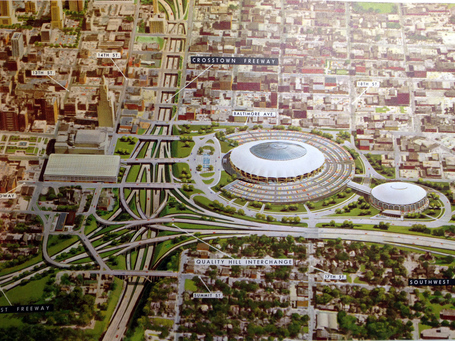 That site is exactly where The Kauffman Center sits today. (Again, click to enlarge the photos.)

At the time, the area was established with commercial buildings, warehouses, apartments and houses. It was estimated that it would cost $20 million to acquire the land. While four major highways served the area, an increased traffic burden and parking was a concern.

Another site was proposed. This area should look familiar: 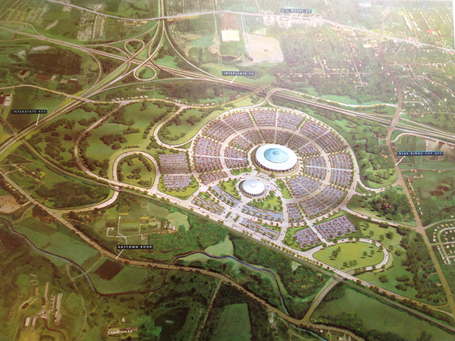 Nestled between Interstates 70 and 435, the Leeds site was deemed an option because of ease of access and availability of the site. Estimated cost for acquiring the land was $2 million. The Leeds area was described:

"The future development of the immediate surrounding area as a result of the influence of the Complex would probably include isolated groupings of motel, restaurant and other highway-use activities. In all probability the general surrounding area will remain primarily a single-family residential section, with a scattering of apartment development. Kansas City has had experience in locating recreational facilities in suburban or predominantly residential areas and has experienced very little commercial activity as a result thereof... The present Municipal Stadium and Swope Park are examples of facilities which draw many thousands of people to their respective locations annually and have for many years; however, neither has yet stimulated an appreciable amount of construction or jobs in it's surrounding area."

Without taking into account the land acquisition, the estimated cost to build the actual dome was $40.57 million at the Leeds site. It was slightly higher at the CBD due to excavation. It's estimated cost was $43.525 million.

A bond issue to build homes for the baseball and football teams passed in the spring of 1967. Yet there was little movement and the A's bolted for Oakland at the end of the year. When the league approved the A's move to Oakland, they awarded Kansas City an expansion franchise for the 1969 season, secure in the knowledge that a new facility would be built and ready to occupy by 1971. (There was some wrangling to get the team in '69 instead of '71, but that's a post for another day.)

People grew frustrated that there was little movement on the stadium issue. Included in my books is a speech written by future mayor Charles Wheeler, at the time the Judge of the Western District of the Jackson County Court. Dated April 3, 1968, Wheeler expressed caution moving forward too quickly as well as disdain for a certain party whom were operating without the best interest of the citizenry at heart: Franchise owners. His speech contains this passage:

Millionaires generally have a great ability to make money. They spend a great deal of their time looking over ledgers. Some millionaires like to be subsidized by the public and will look for situations where they are guaranteed a alarge profit. Marol league francises probably fit into this category. After all, winning was no part of Charles O. Finley's operation. Nevertheless, his franchise more than doubled in value over six losing years in Kansas City. It is one of those rare situations in life where you can win financially, while you are losing."

Wheeler knew what he was talking about.

In 1969, it was decided the baseball and football franchises would call the Leeds area home. And instead of a single dome, there would be two stadiums, side by side. In a report dated March 18, 1968, it was stated the Complex would contain a 75,000 seat football and soccer stadium. (Yes, the plans specifically include soccer) Capacity could be expanded by an additional 25,000 seats. The baseball stadium would seat 45,000, with outfield seating expansion possibly raising the total capacity to 57,500. The plans also called for "a 750 foot long Moving Cover spanning 800 feet and will travel the entire length of the Complex on two tracks. 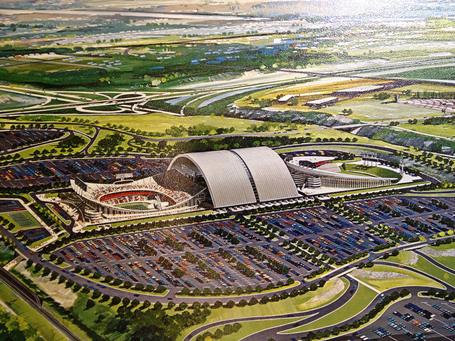 Without the Moving Cover, the cost would be $40.7 million.

The stadium looks pretty close to those early plans. With one notable exception. 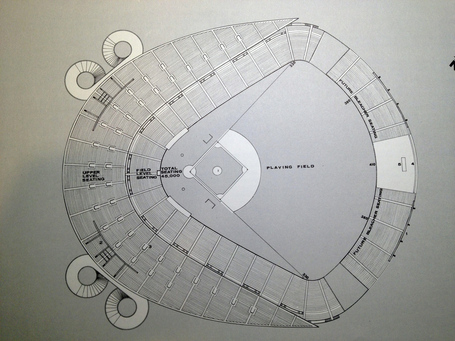 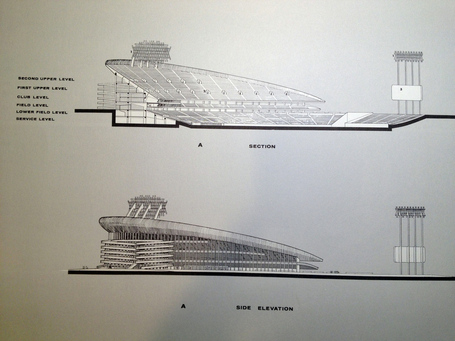 A laborer strike in the summer of 1970 delayed the planned 1971 opening. It was thought the Royals could move mid-season in 1972, but the project wasn't deemed far enough along and the opening was moved back to 1973.

On April 10, 1973 Royals Stadium opened to rave reviews. Ewing Kauffman paid for the game to be televised. Announced attendance was 39,464 which was short of capacity, but a game time temperature of 39 degrees probably had something to do with that.

We didn't get the Moving Cover, but we did get a scoreboard that cost $2.75 million.

Forty years later, so many things have changed. Yet, the stadium still remains one of the best venues in all of baseball.