A cold and rainy day is fore-casted to turn into just a cold and cloudy night. Looks like they should be able to get this game in. Momentum can be overrated in baseball, but you hate to have a rain out when the Royals are on a three game winning streak.

Wade Davis will make his second start for Kansas City after a dismal effort last Friday in Philadelphia. Davis was up in the zone against the Phillies and paid the price. Check out the pitch location and corresponding ball in play results from his first start: 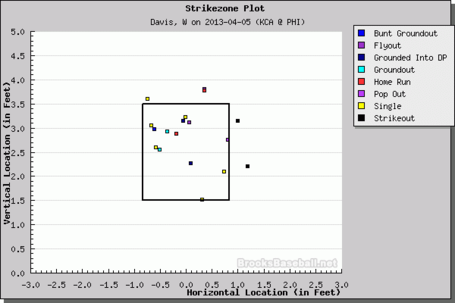 In the second inning, the lower part of the Phillies' order saw more pitchers. Dominic Brown, another lefty hitter, homered on a 91 mph two-seam fastball that was pitch number five of his at-bat. Erik Kratz saw six pitches, the first four all change-ups, before sending pitch number seven (a 92 mph two-seamer) over the wall. Pitcher Kyle Kendrick than singled on the fourth pitch of his at-bat: again a 91 mph two-seamer. Kratz and Kendrick both bat right-handed, by the way.

Something funky happened to Pitch F/x in Chase Utley's third inning at-bat. Brooks Baseball has no data on that at-bat and MLB has the first five pitches identified, but has no information on pitch number six: a double by Utley. We do know that Ryan Howard singled on an 89 mph four-seamer (pitch #5) and Michael Young saw a second pitch curveball (although I'm skeptical that it was a curve given it came in at 91mph) and singled.

Overall, six of the nine hits allowed by Davis were to left-handed hitters. To be fair, the Phillies' best bats are lefties, but we surmised Davis might struggle in this area before the season started.

The total pitch break-down for the outing is a little surprising. Davis threw 35 change-ups, 34 fastballs (25 were two-seamers), 4 curves and 2 cutters. That is a metric ton of change-ups: enough to make one question the data. Given that Davis' average fastball velocity was 91.3 for the game and his change-up was averaging 86, but peaking as high as 89, one can see why the computers might be confused. Unfortunately, the Phillies did not seem to encounter similar problems. As a starter two years ago, over 65% of Wade's pitches were fastballs and only 7% were change-ups.

It will be interesting this evening to see what the Pitch F/x (and your own eyes, dammit!) reflects with regard to pitch types.

We will have line-ups, a weather update and at least one paragraph of information on Twins' starter Liam Hendricks on the Gamethread to follow about 45 minutes before scheduled first-pitch.