James Shields vs. Clay Buchholz. The pre-game ceremonies will make the game special for many, the pitching duel should make it a good baseball game.

The start time for the game today has been pushed back 20 minutes to accommodate the pre-game ceremonies, so first pitch is at 12:30 p.m. CT. ESPN is planning to start televising the tributes from Fenway Park starting at 11:30 a.m. CT. Red Sox beat reporter Pete Abraham told the fans to be in their seats by 12:55 p.m. ET, so I presume their will be some fan involvement in the final thirty minutes of the ceremony, likely similar to the Kauffman Stadium turning into a giant American flag last season.

The Red Sox are wearing a special uniform for the game today, which the team uploaded to their Instagram account 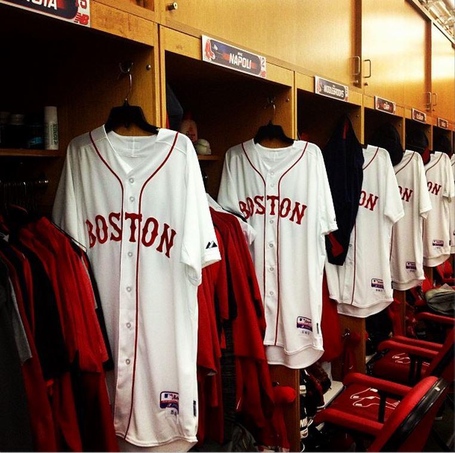 The main difference is that the uniform says "Boston" on the front instead of "Red Sox." After the game, the uniforms will be auctioned off and the proceeds will benefit One Fund Boston.

The Royals and Red Sox are both wearing special patches on their uniforms that read "B Strong." Royals Vice President of Communications and Broadcasting Mike Swanson tweeted an image of Alex Gordon's uniform adorning the patch: 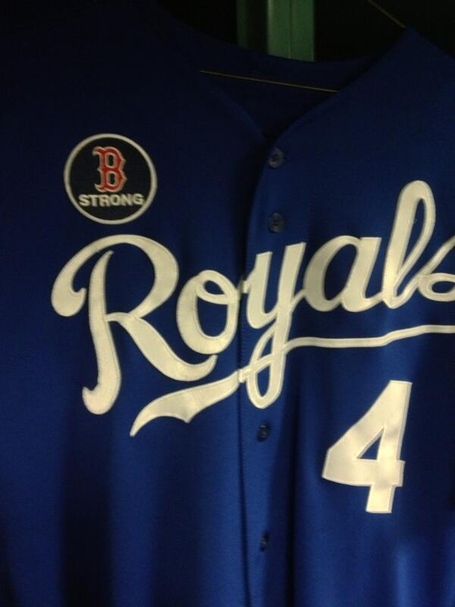 Ned Yost reshuffled the order for today's lineup, but wants this lineup to stick around for awhile. The hardest working man in baseball brings us the lineup:

Yost says today's lineup is one he hopes to use for a while: Gordon, Escobar, Butler, Hosmer, Cain, Moustakas, Francoeur, Perez, Getz.

Fox Sports Kansas City is televising the game, but there are a number of options to watch today's game if you are outside the blackout area. MLB Network is carrying the game, and MLB.TV made the game their free game of the day.

Song of the Day: The Dropkick Murphys - Bastards on Parade

It seems wrong to not pick a song related to Boston today, and I'm personally a fan of the American Celtic punk band. I'm still cheering for the Royals today, so I don't want to pick "I'm Shipping up to Boston," or "Tessie" to show solidarity with the team I'm cheering against. Plus, those are two of their most overrated songs.

"Bastards on Parade," on the other hand, is awesome. Plus, if Kansas City wins today, the few of us actually cheering for the Royals will be the bastards cheering against the narrative, something I'm more than willing to embrace.