Breaking Down the Causes of Moose's Struggles

Share All sharing options for: Breaking Down the Causes of Moose's Struggles

Mike Moustakas has struggled to generated any kind of hits this season. The balls which fall for hits rarely allow him to go for extra bases. The problem has gotten so bad, Moose is now going to correct his swing. I am going to take a stab at what Moose is doing to cause such disaster full results.

Note: Article and data was accumulated after the game on 4/24/13 and has not been updated from the game which just finished.

Looking a little deeper shows Mike's real problem. He has a BABIP of only .176. The low value is being fuel by a 62.7% fly ball percentage, the league leader. Since none of his fly balls have gone for home runs, all his fly balls have probably been outs. Additionally, he has more infield fly balls (7) than line drives (6). Mike stats suggest he is trying to sky the ball out park with too much uplift and not enough power.

Yost states the problem is Moustakas is starting his swing too early.

The problem, according to Yost, is that the left-handed-hitting Moustakas' front foot is "drifting" on his swing, coming forward too soon.
"When you get out in front, you've got nothing left to drive your hands through with," Yost said.

Here are few swings from Moustakas. I am only looking at straight fastballs right down the middle of the plate. I found four such swings with different results each time, infield fly ball, outfield fly ball, a single and a double.

As I noted this past winter, Mike Moustakas' swing makes him inclined to pop ups. He drops his back elbow early in his swing. A low back elbows normally leads to an extreme upper cut swing. Besides the low back elbow, he is a naturally right handed hitter. His dominant arm will be pulling/leading his swing. Normally, the natural right handers hitting left handed love hitting the low inside pitch, which which can be hit easily with the shoulder down.

To see this for yourself, get in a batting stance and point your elbow down somewhat. Now take some imaginary swings at some pitches at different parts of the plate. Pitches high and outside and low and inside are the most natural to hit. The low outside pitch is tough to reach and the high inside pitch is hit with an extreme up swing. Now try to think of doing it from the opposite side of the plate.

The following run value heat map shows where Moose's results are above and below the league average. All events are added in and it is from the catcher's perspective. 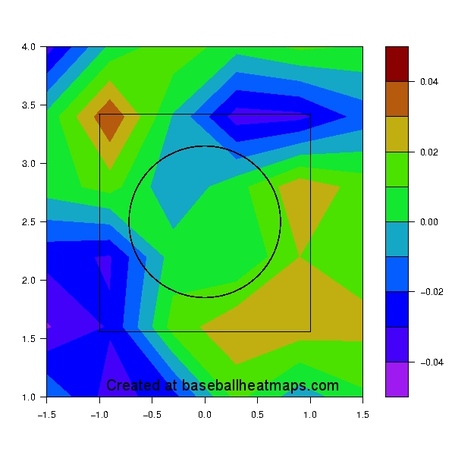 He is good against the high and outside pitch and the low inside pitch.

Pitchers are now noticing he has problems with the high inside pitch and are pounding that part of the plate. Last September, 7.1% of the pitches he saw where inside and high. This season, the number has almost doubled to 13.9%. To further show how pitchers have changed their approach, here is the average pitch location for each pitch he has season over the past 3 seasons. 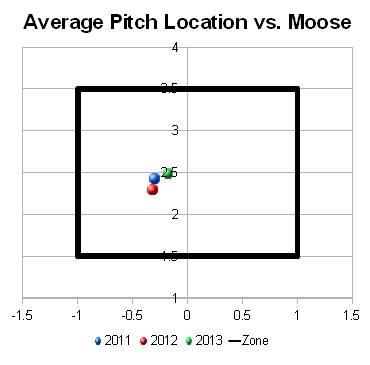 While, not a ton of change, pitchers are going inside quite a bit more with him.

Mike Moustakas's problems come down to a few points. His swing leads to flyballs, specifically infield flyballs. Flyballs are easy outs. A high number of outs leads to horrendous production. Horrendous production is a nice way to describe Moose's season to this point. Until Moose is able to hit with out skying the ball, he is going to continue to struggle.