A four game series that includes a day-night Sunday doubleheader and stretches into Monday. Oh, and the Royals are still in first. Weird.

Share All sharing options for: Game 22 Preview - The Indians again?

The Royals and Indians combined to touch home 22 times on Sunday. Tonight promises to be even more explosive.

That's because the Indians send Ubaldo Jimenez to the mound. Yes, he's still in the league. A 10.06 ERA and 4.46 xFIP. The guy allows a ton of base runners and has a strand rate of under 40 percent. That would explain the disconnect between his ERA and xFIP and the copious amount of base runners explains why the xFIP is still so elevated.

Meanwhile, Wade Davis finally saw his elevated strand rate correct in his last outing. You know, the start where he allowed seven of his 12 base runners score? Positively Ubaldoian effort. Except, not all of that could be pinned on Davis, as Mike Moustakas allowed a possible double play ground ball to go right between the wickets which meant only three of the seven runs were earned.

Davis has now made four starts and sandwiched two stinkers around two decent appearances. Perhaps the one consistent thing we can say about his 2013 thus far is he hasn't yet found the sweet spot when it comes to the economy of pitches. Part of that stems from allowing far too many base runners.

Davis has been using his cut fastball to put batters away this season. It's his preferred secondary pitch when he's ahead in the count: 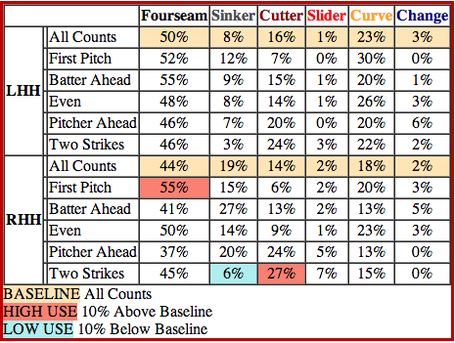 Good thing, because that's been his most effective pitch. It looks as though it's a relatively new offering. One he developed while pitching out of the bullpen last summer.

The Royals are still in first, but only by a half a game. Their offense is hitting their stride and this whole Jose Valverde thing is disturbing. They are in action tonight against the Twins.

Meanwhile, the Royals TV ratings are setting records almost nightly. The first game Sunday set a record with a 7.9 rating, blowing by the old record of 7.5. Saturday's game was the most viewed television program in the Kansas City market. It only supports what we've been saying forever: Put a product worth watching on the field and people will actually... watch. I know this confounds Mr. Glass, who thinks fans are enthralled with saving nickels and putting carousels in the outfield.