Does a quick start matter for the Kansas City Royals?

To the team, it shouldn't. To the fans, it probably does.

Share All sharing options for: Does a quick start matter for the Kansas City Royals?

Expectations surrounding the team are higher than they have been in the recent past. Everyone has pretty well staked their position on the team's offseason, but it's difficult to argue that the team is not better heading into 2013 than they were in 2012. Each individual has different expectations for how the Royals will perform this year, but the fanbase as a whole seems to have higher hopes for the season.

The higher expectations surrounding the Royals bring higher emotions as well. I would guess that more people are tuned in to this season than recent past, and people will be watching this team intently early in the season to see if they are a fraud. I think there is a strong possibility that people will overreact to how the team starts this season, regardless if it is a positive start or a negative start.

So I would like to remind the optimists and the cynics in our midst that standings at the end of April are not strong predictors about how the standings will look at the end of the season. As long as the team avoids a terrible first month (like last season) they will still be very much alive for a playoff berth, but a great start (18-11!) doesn't guarantee anything.

Chris St. John did some quality research two years ago on when a team's current record is a statistically significant indicator of what their final record will be. The whole article is worth a read, but I'm lifting the graph that shows April winning percentage plotted against the end of season win total to remind everyone how little we know about a baseball team after one month: 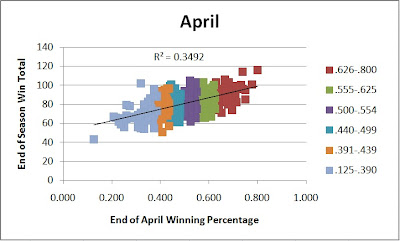 There is a slight correlation between how a team performs in April to how they end up overall, which makes sense; these games do count toward the overall record. There is way too much noise, however, to draw any firm conclusion about how good of a team the Royals will be after April.

So the team's record at the end of April will not have a big impact on their final record. There are arguments, however, that could be made that it might be more important to this particular team and fanbase.

Kansas City, as you are well aware, has played some very bad baseball for quite a long time and hopes to change that this season. I'm personally skeptical that a "losing culture," is something that actually has an impact on a particular team; I would argue that the Royals struggled for so long because the team has been devoid of adequate talent for 27 years. Anyone that puts more stock in these unquantifiable parts of baseball may see the need for a young Royals team to boost their confidence by starting the season well. If they don't start strong, it will be easy for the team to fall into the cycle of losing everyone is accustomed too.

I would hope that all the veteran leadership the Royals have acquired would help avoid these type of confidence issues that might plague the younger players. It might be difficult to prove, but it's certainly easy to believe that part of Eric Hosmer's struggles in 2012 were mental. Some level of success early on may have helped his confidence level, which would have helped him handle the season better. At the same time, Mike Moustakas hit 50 percent better than league average the first month and finished the season with a .296 OBP.

Based on the team's youth and previous struggles, I imagine someone will make the argument that this team needs to start fast, but I have a difficult time placing merit in that statement. None of the key contributors are rookies, and there are enough veteran players who have been through the grind of the season that the team should not overreact to the first month in either direction.

The Royals fans might be the group most in need of a strong start to the season. Kansas City will play 25 games in April; the team could only win 10 games and still feel OK about their chances this season at the end of the month (I'm assuming that the team believes that they are a playoff team). Does anyone think that most Royals fans won't dismiss this team as "same old Royals" if they go 10-15 the first month?

I don't know if it matters if the team has the full support of the city, and I'm fairly certain that people would come back if the team started winning over the summer, but it would be nice for this team to play in front of excited crowds early in the season instead of indifferent ones. I also want people who have drifted away from the team to come back and cheer for the Royals, and a strong start would help drum up interest.

How the Royals start the season will likely have an effect on fan psyche, it shouldn't have a huge impact on the season as long as the Royals avoid an extreme losing streak. A hot or cold start for Kansas City will likely create fodder for discussion, but I implore everyone to remember that the baseball season is very long, so don't overreact in either direction to one month of games.