The Royals starting pitching has been remarkably improved this season. In the AL they have the 3rd best RA at 3.83. In 2012 it was 10th at 4.60. Another way to look at it is the to compare the Game Score for each of the first 23 starts in 2012 to 2013. Game Score was invented by Bill James show how valuable each start was. A score of 50 is average. Here are the value ranked best to worst. 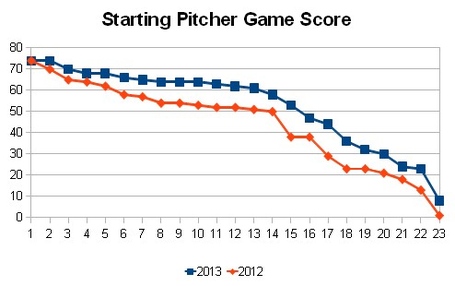 The starters average 2013 Game Score is 8.5 points higher than 2012. The starting pitching has been a strong point for the team.

Normally I don't read or look at the Bill James Handbook. The data is available online and no new insight is in it. I was given a copy for free (someone else found it useless after buying it) and looked through the 2012 leaderboards. Here are some interesting 2012 season tidbits.

A recent issue of Baseball America had all the minor league coaches. Here are the ex-Royals I noticed (I am sure there are some I missed)

Wade Davis, Probably Not a Starter

The FIP values don't even differ by 0.2. So far this season Wade Davis looks to be the starter he always, a crappy one.