Salvador Perez has already shown himself to be a good player, but he could make further improvements by changing his approach at the plate.

I wrote an article a couple of weeks ago about Eric Hosmer, and I issued this statement about the Kansas City Royals lineup:

the best hitters have likely reached their peak (Butler, Gordon) and most of the other hitters don't have particular high ceilings, except for Hosmer and Moustakas.

I then proceeded to contradict my own claim, which I'm pretty sure is a sign of good writing. Salvador Perez has hit well enough in the major leagues during his young career to raise his ceiling from a C+ prospect that projects as a "solid starting catcher," to being hailed as a "Latin Johnny Bench."

Perez, in limited playing time scattered across two different seasons, has been really good at the major league level. The almost 23-year old catcher has posted a .311/.339/.471 triple slash line after 473 plate appearances. Combine that with strong defensive numbers, and Perez has basically been a 4-win player in less than a full season's worth of playing time for the Royals.

When someone plays at such a high level at such a young age, it's hard not to start dreaming about how good the player might become. Based purely on his success and age, Perez's ceiling really could be considered a Latin Johnny Bench.

There are reasons to be skeptical about his ability to reach that level of play. One, there are not many superstars in baseball; it's reasonable to be skeptical about any player becoming that good. He also did not hit particularly well in the minors, nor did most scouts project his bat playing this well. That's not to say players cannot improve or scouts are infallible, but you would feel better about Perez's chance of becoming a superstar if anything previous had indicated that possibility.

The biggest hangup for me to jump aboard the "Salvador Perez for President" bandwagon is his approach at the plate. Perez has shown that he has excellent contact skills, but based on what I have observed watching the games and combing through Pitch F/X data, I believe his current approach at the plate could use some improvement. Teams will likely change their approach when pitching to Perez, and he will need to adjust his own strategy at the plate to unlock his full potential.

Perez has a fairly unique skillset as a hitter. He hits for contact and power, but does not draw walks. Isolated power is negatively correlated with contact percentage; generally, people who hit for power do not make consistent contact.

As much as I would love for Perez to learn how to work the count and draw walks at an above-average level, that's an unrealistic expectation. His 3.9 BB% would have been fifth lowest in the league had he received enough at-bats to qualify. If Perez continues to develop as a hitter, his walk rate should increase some simply because pitchers will be less willing to throw him pitches in the strike zone. We are unlikely, however, to mistake Perez for Carlos Santana.

So when analyzing Perez's Pitch F/X heat maps, it needs to be understood that Perez is going to swing at quite a few pitches and swing at pitches outside of the strike zone. His heat maps may never look as visually pleasing as Lance Berkman's do, but as long as Perez is aggressive on pitches that he hits well and lays off enough pitches that he struggles against, his contact and power skills should allow him to hit at a high level.

The first Perez heat map I will present is called a Batter Run Value Heat Map. Zimmerman explains how these heat maps work:

The Run Value are taken from the work of Joe P. Sheehan at Baseball Analysts where he determined the average run value for each possible pitch outcome on each count. These values are then average together to find each player's average run value. 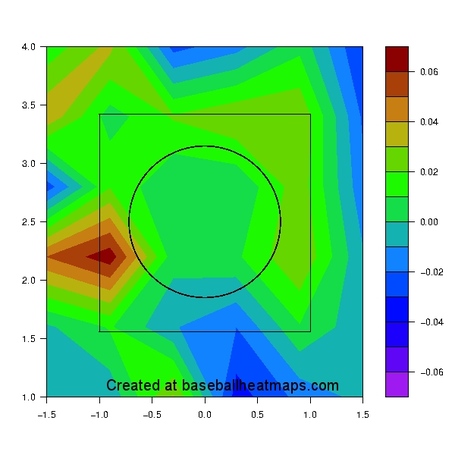 Therefore, an ideal heat map analyzing the pitches Perez swings at would show that he focuses more on inside pitches, and swings more often in the upper two-thirds of the strike zone. Unfortunately, the catcher takes far too many hittable strikes and swings too often on pitches that favor the pitcher.

The scale is the percent that the player swings at pitch in that part of the strike zone. If the player is being compared to the league average or another player, the values are the difference in percentage points. 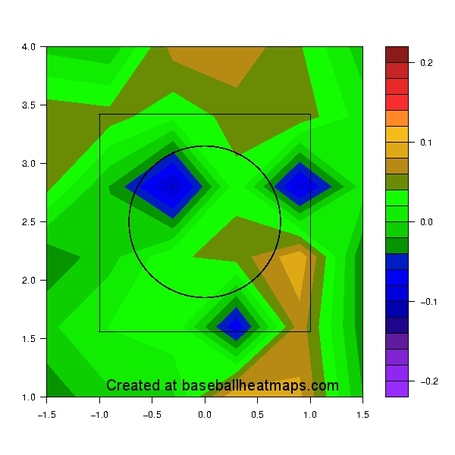 His approach against left-handed pitchers reveals some areas to be improved upon. Perez should be swinging more in against pitches in the (-.5, 3.0) area. He also swings too often at pitches in the lower-right hand corner, which he has little success against. It's not a perfect heat map, but it's acceptable. 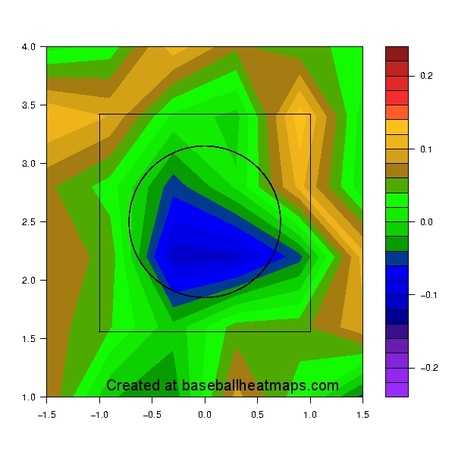 The blue in the middle of the strike zone doesn't look good either. Perez is an aggressive hitter and he is unlikely to see a better pitch in an at-bat then one thrown right down the middle. When a pitcher throws a pitch down the heart of the plate, Perez would be better punishing the pitch than taking it, as he is unlikely to work the count to force the pitcher to throw a lot of pitches or draw a walk.

In Part 2 of the series, I will analyze more heat maps to reveal some of the fundamental issues that are hurting Perez's approach at the plate and offer a player that Perez should attempt to model himself after.