Better late than never as the Royals rally in the eighth for the win in the home opener.

Entering the eighth inning, the Royals had five hits and were down 1-0 to the Twins. This had the makings of a rerun of the show we saw exactly a week ago in Chicago. Then, a Lorenzo Cain double, a Chris Getz bunt and an Alex Gordon single tied the game. An Alcides Escobar double broke the deadlock and chased Twins starter Kevin Correia. Our man Billy Butler added insurance with a single.

Despite my pregame snark, Ervin Santana kept the ball in the yard and held the Twins to just a single run on eight hits. He walked one batter and whiffed seven, throwing almost 75 percent of his pitches for strikes.

Quite the turnaround from last week.

Santana's fastball averaged 93 mph, up almost three mph from his debut outing of 2013. If we're going to infer anything from this, it's that the PITCHf/x gun at The K is warm again this year.

According to PITCHf/x, Santana threw 51 fastballs, 48 sliders and four change-ups. The slider was flat dominant for him on Monday. He threw it for a strike 75 percent of the time and generated 14 swings and misses.

From Brooks Baseball, his velocity trended downward throughout the game. His last pitch registered at around 92 mph, about 2 mph off his average: 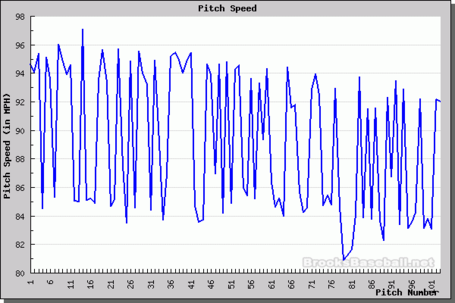 Santana is probably on his way to a season of bizarre home/road splits.

Aaron Crow came on to close the game for the Royals. There's probably some talk of closer controversy after Greg Holland's last two games, but there shouldn't be any of that discussion... At this time. Holland was likely unavailable after appearing in back to back games and throwing 35 pitches. He also needed 20 pitches to close out the Royals first win of the season. Kelvin Herrera is coming off a stretch where he worked three of the last four games. Crow was next in line.

If it were up to me, that would be how the bullpen would work. You have three solid guys at the back, so why not move them around? We all know that ain't happening.

I think Yost has flashed a quick trigger in switching guys out who have struggled. Holland is still the closer and the team won't admit it, but he's on a short leash.

-- While I am generally anti-bunt, I was on board with the Getz sacrifice in the eighth. They needed that run and at the very least I expected Gordon to get the ball in the air to tie the game.

-- The Royals paid tribute to Paul Splittorff - who started the first game at the stadium - in a pregame ceremony honoring the 40th anniversary of The K. Nice touch having Jamie Splittorff throw the first pitch to John Mayberry who hit the first home run at the yard. And always good to see the alumni return.