The weather as been somewhat cooperating.

Share All sharing options for: KC Area Amateur Scouting: Sean Manaea and Others

At the beginning of the college season, it seemed like no chance Sean Manaea would drop to the Royals pick at #8. Keith Law had him at #2 on his board and Matt Garrioch at mlbprospectguide had him at #4. His stock has fallen abit as his velocity is down a bit and he is dealing with a hip injury. He new may be an option for the Royals.

To begin with, here are a few recent quotes about him.

It's been a disappointing year for Indiana State left-hander Sean Manaea, and then came news that he would miss his start on Friday because of a hip strain. Manaea was able to throw on Sunday and went six shutout innings with nine strikeouts and no walks, but it created a concern with a few scouts I talked to.

"Hip injuries can just be such a lingering issue," an NL scout said. "Even if it's mild and creates just a little bit of discomfort, it's something to keep an eye on because they have this nasty habit of coming back. [I'm] not saying that it's a reason not to draft a kid, but it's more homework for a club to do and can put doubt in a club's mind."

Overall, he is more raw then I expected. His delivery isn't easy. He seems a bit awkward in his delivery at times. The arm is there and the slider shows a ton of potential. The change needs a lot of work. The smaller stuff will come with work and time. I see a guy with a big arm and enough stamina to be a starter. I see a guy with the stuff to be a reliever, though. The overall package, right now, isn't good enough to be a top 5 pick. If you want to project and have confidence you can fix the smaller things, he is. If you are looking for the college arm that just needs to face pro hitters, acclimate and move up and take a rotation spot in a year or so, this isn't the guy.

For now, he's still really interesting because of the velocity and command, but I couldn't take the guy I saw tonight in the top five picks -- and certainly wouldn't take him ahead of Oklahoma right-hander Jonathan Gray today.

I was hoping to see him pitch last Friday night, but because of the previously mentioned hip injury, he didn't throw until Sunday. Instead of going to the game by myself, I had my two little ones in tow. To start off the the game, he threw to one batter and and then the game was delayed for lighting. The game resumed about 45 minutes later.

First, here is the video I shot of him during the game. 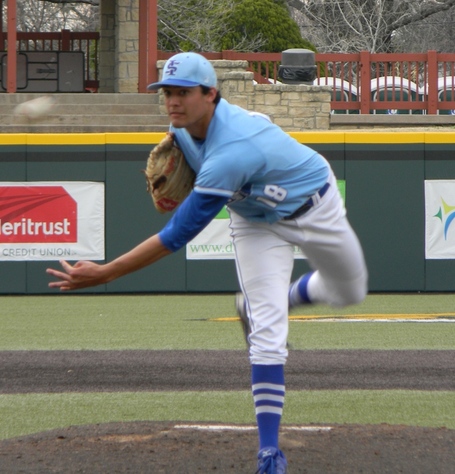 Finally I got to see Minnis pitch. He is probably the top pre-season prospect for the Shockers. Baseball America had him as the 7th best prospect in the MVC and the mlbprospectguide has him as the 211th top draft prospect in the county. After watching him, I could see a team take a chance on him. He doesn't have a ton of up side, but almost every team has a soft tossing lefty in the bullpen and Minnis could be one of those guys. 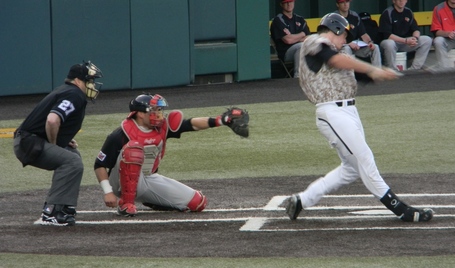 Hollenbeck was the most draft worthy player on Illinois State with Baseball America having him as the 5th best MLB prospect in the MVC. He will need to reinvent his swing and receiving mechanics if he want to be anything more than a bullpen catcher for a independent league team.

I saw D.J. Peterson against Arizona State while at spring training and wrote a small bit up on him at Baseballheatmaps. I like him quite a bit and would not mind the Royals picking him up if available in the comp or the 2nd round if he is still on the board. I don't see him as a top 10 pick though.