Want to win some free Royals cards? Excellent. Stick around after the post and answer the trivia question by Tweeting the answer to @chrissssrossss being the first to answer in a comment. A random winner will get an envelope in the mail stuffed with various 2013 Royals cards including a David Lough Rookie Card. I've got too many and my momma taught me to share. 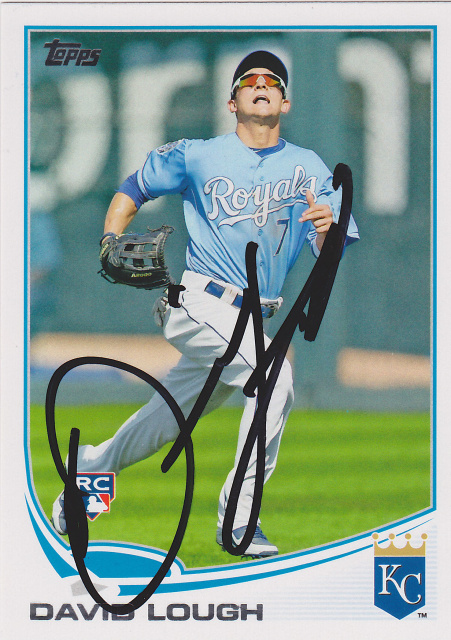 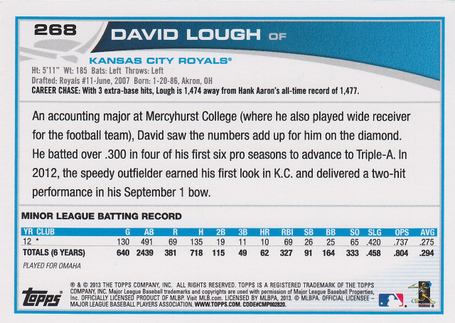 Today we honor our only hope for an answer in right field... for the next 2-4 weeks. Lough busted in last night with the games only RBI and beautiful outfield assist. You might have noticed that streaky black smudge on the card above, which I assure you is not on all of 2013 Topps Lough rookie cards. David was extremely kind and autographed this card for me after I mailed it to him during spring training. He's one of just a few Royals who will actually do that, so I was ecstatic to see him called up.

This photo is a pretty good example of how different cards are today, for the better. Thirty years ago most cards still featured portrait shots of players for good reason. The majority of games were still consumed via radio or poor quality television broadcast. Cards served the purpose of showing you what each certain player looked like. For me it's almost impossible to fathom that my father spent a summer listening to Jack Buck and Harry Caray call the '67 Cardinals, knowing every player by heart, but had virtually no idea what most of the team looked like. Since we live in a different world now, cards often feature awesome action shots such as this.

Topps really stepped it's game up this season with the new card designs. Nicknamed "the Sea Turtle", this year's design has gotten rave reviews from collectors. The border is clean and tidy with the player's team's main color featured prominently. It took me a few dozen packs before I realized that the bottom left corner of the image had a little homeplate above the player's first name. Beautiful!

Other cool facts featured here: David Lough was born in the same town as Lebron James. At this pace David Lough will finally match Hank Aaron's extra base hit record in the year 2504.

David Lough is having a career year in 2013. His SLG is resting at .750, nearly double what he produced in 2012 for the Royals. Obviously he's on pace to make Mike Trout look like Bobby Crosby in comparison as he takes home the AL ROY award. Seriously though, Lough has been absolutely tearing it up this season at AAA and in spring training. Through 36 games with Omaha he has compiled a .393 OBP with an OPS of .870. I'll leave it up to some of our more intelligent bloggers to explain why this is an anomaly, but it's tough to deny that he makes a pretty serviceable fourth outfielder. Or every day rightfielder. Pleaseee let him play right!!!

TRIVIA QUESTION: (Leave the answer in the comment section to win)

How many former baseball players from Mercyhurst College (including Lough) have played in the majors?