Share All sharing options for: The Royals slide continues; drop opener to Astros

Houston was supposed to provide the tonic to wash away the stink that was the Oakland experience. Of course it didn't work that way.

-- Starter Jeremy Guthrie continues his freefall back to Earth. On Monday, he kept his pitches in the zone in the upper half. Leave your pitches there and even the Houston Astros will find a way to crush. 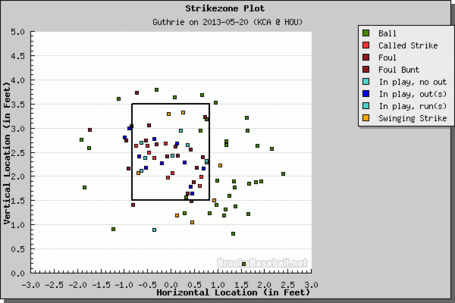 As you can see, he was also wild out of the zone. The total damage was 11 baserunners in 5 innings. Included in that tally was a pair of home runs.

-- Eric Hosmer collected three hits, but it was a very Hosmerian way: An infield single, a ground ball back up the middle and a double to left.

-- Jeff Francoeur had a three hit night as well. Why always us?

-- Alex Gordon had two walks in a game for the first time this season. A positive development.

-- Sal Perez left the game with a hip contusion suffered when sliding into the dugout railing while chasing a foul pop. He's expected to just miss a single game. Uh-huh.

Still two more chances to get at the Astros. Wade Davis and Bud Norris tomorrow with James Shields and Jordan Lyles on Wednesday.