Should Wade Davis move to the bullpen?

Alternate title: How much longer can the Royals live with Wade Davis in the rotation?

Share All sharing options for: Should Wade Davis move to the bullpen?

Another typical night for Royals starter Wade Davis. Five innings of work where he threw 102 pitches. He allowed eight hits and four walks. It was a minor miracle he allowed only three runs, with all three coming on a Jimmy Paredes home run in the fourth.

Thank goodness for the Astros.

When your starting pitcher can only last five innings and is getting dinged around by the worst offense outside of Chicago, that's not a good thing. Davis has now made nine starts on the season and has made it to the sixth inning just three times. Yet he averages 94 pitches per start. He has managed to top 60 in his Game Score three times, but in my mind, his only truly good start was the one in Atlanta back in April.

Davis doesn't seem to have the stuff to stay in the rotation. His pitches lack movement, he leaves too many of them over the heart of the plate and batters are taking full advantage.

A quarter of the way through the season, it's time to compare and contrast his 2012 season as a reliever along with his current season as a starter. All numbers are from before his start on Tuesday. I don't think they would have improved.

Coming out of the bullpen, here's what Davis offered opposing hitters in 2012:

He's lost a little velocity, which is to be expected. He's mixing his pitches more, throwing a few more sinkers, cutters and the occasional slider. Again, that's to be expected.

Let's look at when he throws these particular pitches. First, as a reliever. 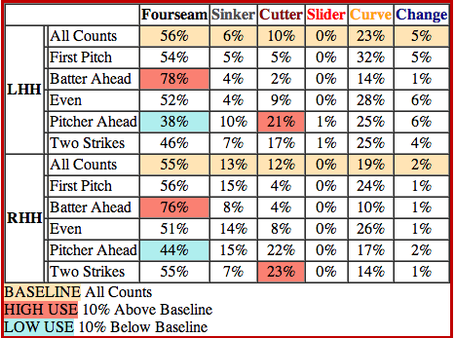 Now, as a starter this season: 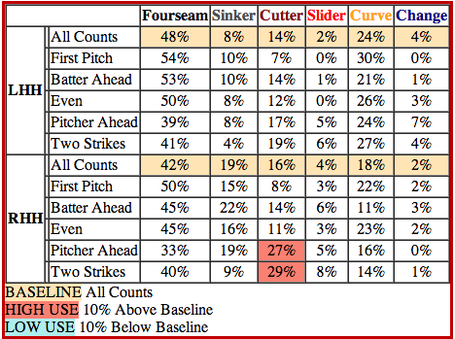 Last year, he really relied on his fastball once he fell behind in the count.It looks like he will go to his sinker in any situation now against right handed batters. He's also more likely to mix in a cut fastball when he falls behind.

Last season, Davis's curve was extremely effective while coming out of the bullpen. So was his cutter. Here are the results from the final pitch of a plate appearance last year:

Those are some impressive results. Now compare to this year:

Now whenever he throws his sinker, cutter or curve, Davis is effectively turning opposing hitters into the lovechild of Barry Bonds and Ty Cobb. That's one mean SOB.

Revisit the top two charts. In addition to the drop in velocity, his sinker and curve have both lost a lot of spin and movement. As a starter, Davis has had both pitches flatten out, which would definitely diminish their effectiveness. On Tuesday, he spun a beautiful curve to Jose Altuve. That pitch had a ton of break and had Altuve buckling his knees. Unfortunately, it's a pitch Davis is unable to consistently throw as a starter.

Less velocity and less movement make for a less effective pitcher. The proof is in the results. The sooner the Royals extract Davis from the rotation, the better.

But while the Royals are short on starters, he will remain in the rotation. I know we are counting on Danny Duffy and Felipe Paulino to return at some point and they may push Davis to the pen. I won't hold my breath, though. For now, the Royals are stuck with Davis at the back of their rotation. But in the long run, it looks like his most suitable role will be coming in from the pen.