The Angels Are Coming to Town

Share All sharing options for: The Angels Are Coming to Town

Tonight, Royals will be facing off against Joe Blanton, the not so dominator.

Maybe the Royals can get a win off him. I am even going to take one for the team tonight. I am starting him in a nearly last fantasy league tonight: 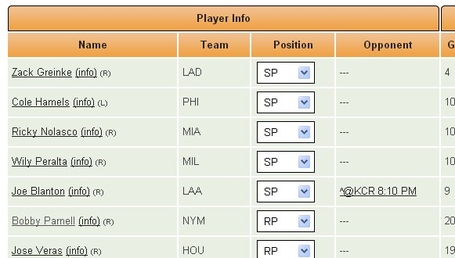 In other news, the Royals sent Herrerra to AAA and brought Louis Coleman up.

Not a real surprise considering the organizations bullpen depth.

Finally, tonight wil(l) be hosting my last game chat until school starts back up. Too many T-Ball games and kids at home to regularly put out decent material. I probably post material every once and a while, but nothing on a regular basis. Hopefully, I can start back up once school beegins.