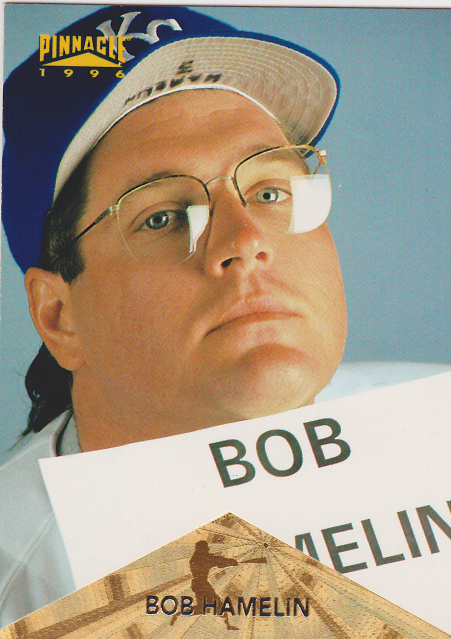 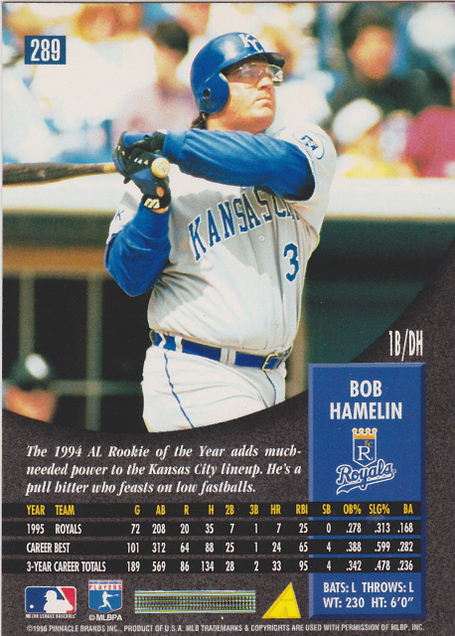 The thug above is 1994 AL RoY Bob Hamelin, aka Bobizzle Hamizzle. Unlike most hoodlums growing up on the rough streets of Elizabeth, NJ, Bob made it out of the ghetto. His OG spirit never left him, which lead to this mugshot. The Pinnacle photographers showed up for picture day but found out from manager Bob Boone that Hamizzle was down at the JC Correctional Facility serving time for robbing a Hostess Truck. They hurried down there to get a picture of this phenom, leading to the awfulness above. Bob, being quite shy compared to most gangsters, grabbed his name placard and casually held it up to cover his double chin. THUGLIFE

Seriously, what the HELL were they thinking? Most players were subject to the normal run-of-the-mill embarrassing shots like this: 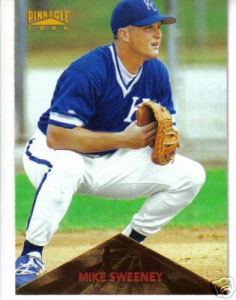 What did Pinnacle have against Bob Hamelin? I know I should be focusing on the card design, but that amounts to that stupid gold foil triangle in the bottom. Awful.

For such an awful front, the back really is pretty good. It would be nice if they had shown his '94 statistics instead of '95, because they were way better. Bob actually looks pretty badass on the photo in the back, coolly watching his latest 500 foot bomb.

If Barry Bonds gets an asterisk next to *762, Hamelin needs one next to *1994 RoY. Bob played in 101 games before that dirty players union and corrupt league office ruined baseball's innocence by stopping the season. He put up some stellar numbers but he was total crap in 1995. My version of Naughty By Nature's hit song above really isn't fair. Bob was remarkably good in every year but 1995 at getting on base. Through 89 games in 1996 Bob posted .255/.391/.435. Since the only stat that mattered in 1995 was that first number, he was granted free agency following the season. Bob retired in 1997 but continues to scout, most recently for the Red Sox. I haven't seen Hamelin in a long time, but I'm betting that right now he's in the stands of some college baseball game flashing his grill, bling-bling chains and bifocals while looking for the next OG prodigy.