Last Friday, I was able to see Jonathan Gray of Oklahoma pitch against Kansas State. Jonathan is considered one of the top two pitchers in the upcoming draft. While he is probably the best player I have seen this season, some issues stood out during this outing.

First off, the game was a cluster fuck. The stadium was sold out with at least few hundred standing room only tickets sold. Usually, even in a full stadium, I am able to move around and get the views I need and get my radar gun on a pitcher. Not at this game. I was stuck in the TV camera bay with half dozen or so other media types or standing in front of a trash can.

I did see a lot of Gray I liked. His body reminds of Justin Verlander. Tall, thin, but built. The first thing that stood out is he works extremely fast. I almost didn't need to cut the video to save time. I left an instance of one throw to the next to show this speed. The one exception to working fast is when a running gets on. He totally loses focus and seem flustered.

He really comes after hitters from 3/4 slot by throwing strikes. He only walked one batter, did hit two of them.

His mechanics are the best I have seen for a college pitcher this year. Both his fastball and slider have great late movement. Though I didn't have a gun, he seemed to lose a little off his fastball the fourth time through the order. 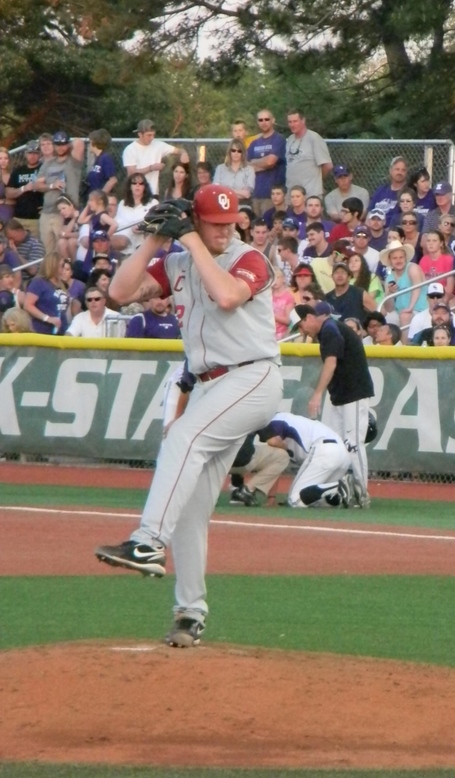 I expected him to dominate the K-State lineup, but wasn't to be. K-State got 9 hits off him and seemed to steal his attention with the base runners. Others agree he didn't have his best stuff. From ESPN:

There were fewer positives for Jonathan Gray in his start this weekend. Gray gave up nine hits and four earned runs in his six innings against Kansas State, walking one and striking out just three. While the Oklahoma right-hander hasn't been as dominant of late, his stock hasn't diminished significantly and probably won't fall past the Cubs at No. 2 overall.

I was a little disappointed in Gray. He is still the best player I have seen this season. I could see where other talent evaluators would prefer other prospects over him.