The Royals pop-gun offense looks absolutely anemic, and a terrible call by umpire Marty Foster didn't help things as the Royals are able to overcome stupid decisions by Mike Scioscia to lose their third in a row.

We're getting to the point where we get legitimately excited if the team scores two runs. That's a lot!

Jason Vargas has owned the Royals in his career, despite having utterly mediocre-looking stuff, and less-than-mediocre stats. Tonight was no different as the Royals came up swinging at everything. Through five innings, Vargas had only through twelve pitches total. Well not quite, but it seemed that way. Remember that meeting they had about not hacking at everything anymore? Lot of good that did.

Luis Mendoza pitched just well enough to keep the team in the game and exited stage left after five innings. The audience groaned as the understudy was announced - Luke Hochevar. Ned has maximized Luke's utility by putting him in low leverage roles, so perhaps he was confident Luke could handle a 2-1 lead in the sixth inning. Luke promptly gave up a home run to Angels catcher Chris Ianetta, then a triple to J.B. Schuck that would have almost certainly led to another run had Angels manager Mike Scioscia not inexplicably set a squeeze bunt play in motion (hey, how about trading for Scioscia?). It failed, bailing Hooch out of the inning, but his leadoff walk in the seventh would come around to score in a three-run inning that gave the Angels an insurmountable 5-2 lead.

#Royals' Alex Gordon has come up in the first with two outs and none on in 13 of 15 games since switching from first to third in the lineup.

So its like Alex is the two-out rally leadoff man! 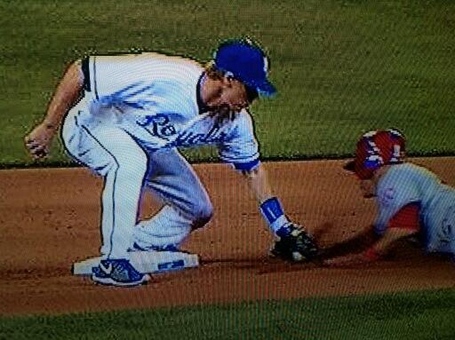 Safe of course. Clearly Trout is touching the bag with his hand in Harry Potter's cloak of invisibility. Good thing umpire Marty Foster was aware of that fact or he would have embarrassed himself. That would be the winning run. Ah, the "human error" is one of those quaint little aspects of baseball.