The Kansas City Royals lineup looks similar to the one they used last night, but Miguel Tejada will start at second base for Chris Getz. Pine Tar Press writer David Lesky with the lineup:

Tejeda only has 35 career innings at second base, but he's looked fine defensively everywhere except first base this season. Getz isn't great defensively himself, so the drop-off likely won't have a huge effect on the game.

The Chicago White Sox lineup is also similar to the one they employed last night, but the team is starting their backup catcher today. Chicago Tribune beat writer Mark Gonzales tweeted a picture of the lineup: 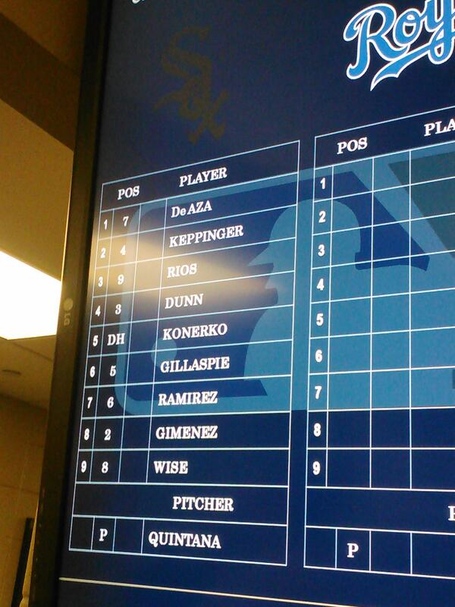 Hector Gimenez is behind the plate instead of Tyler Flowers. Gimenez is a career journeyman who has 41 career plate appearances since 2006 coming into Sunday.

Song of the Day: Pendulum - Watercolour

Sorry if you were hoping for something Cinco De Mayo related, but it's a pretty stupid holiday for Americans to celebrate. So I'm just going to ignore it.

Pendulum is a pretty awesome. They started as a more traditional drum-and-bass group, but started incorporating rock music into their sound. I think you can appreciate their older, darker music and their newer, more mainstream sound, but I understand why D&B enthusiasts charge the band with selling out.