It's Shields against Sale again. Except it's May. So the stakes are higher.

Follow me to the Wayback Machine as we set the dial for April 1, 2013.

James Shields, making his Kansas City debut, versus Chris Sale. Both starters are up for the challenge. Both throw darts, racking up the strikeouts and keeping hitters off the bases. It's the stuff of legend.

Except there must be a loser. And in this case, it was Shields who was dinged for the Loss. On a blustery afternoon on the South Side of Chicago, his only error was a fat pitch to catcher Tyler Flowers who deposited it into the bleachers.

Meanwhile, the Royals had runners on base in seven of the nine frames. Twice they were erased on double plays. Once, the bases were loaded with one out. What did they have to show for their efforts? Zero. Goose eggs. A void.

Since April 1, the two clubs have seen their fortunes reverse. The Royals are playing interesting baseball. Dare I say... Fun. They are scoring almost 4.5 runs per game which is above league average. Chicago, is plating under 3.5 runs per game.

On the flip side the pitching has been fairly even, still with the edge to the Royals. Kansas City pitchers are allowing just 3.8 runs per game. The Sox are just above 4 runs per game.

Yet the Royals record stands at an impressive 17-11. The Sad Sox are almost the converse at 12-17.

Sale's best pitch is his slider. He will go to it when he's ahead in the count, especially to hitters from the left side. If he jumps ahead, it's a 50-50 chance he will show slider to a lefty. It's still a key pitch against right-handed hitters, but Sale will go to his change a little more when they have the platoon advantage. 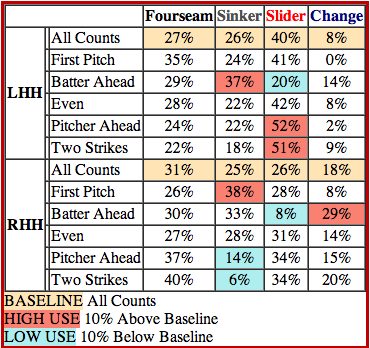 As we would expect, Sale has been murder against left-handed hitters. He's allowed just one hit in 29 plate appearances against unfortunate lefties. They own a slash line of .034/.152/.034 against his this year. That one hit? Eric Hosmer. Back when he could pull the ball.

Sale has been a bit more home run happy this year. In fact, he's given up seven in 40 innings. Four of them have come off his slider. Worth noting the Royals are dead last in the AL in home runs. At least with Billy Butler and Alcides Escobar (I'm not kidding) they have some pop from the right side. Pop being a relative term.

Shields has been as advertised. He may not be a "True Ace" but he's the ace of this staff. With a 3.00 ERA, a 3.22 xFIP and 1.2 fWAR, he's the leader in every sense of the word. We may still be smarting over The Trade, but we can't argue with the short-term result. The Royals are in this match-up because they have a guy who can go pitch for pitch with Sale. That's nice.

I've made several observations of the Royals Central Division rival this weekend. They are as follows:

-- The Chicago defense is atrocious. It reminds me of the 2009 Royals. Baseball Prospectus' Defensive Efficiency doesn't agree, ranking the White Sox ninth, ahead of the Royals. But I've seen more baseballs butchered this weekend that at one point I thought I saw Sam from the Brady Bunch in their dugout.

-- The brilliance of Robin Ventura is nuclear blast bright. This is a guy who intentionally walked Jeff Francoeur five times last season. I mean, you can't let Chris Getz beat you. Mushroom cloud.

-- Jeff Keppinger is batting second. I can't even begin to comment on this. Someone gets paid to write this lineup.

-- They are a slow team. Yes, they have a couple of guys who steal a base, but by and large this team doesn't do much on the bases. According to Baseball Reference, they have taken an extra base 27 percent of the time, well below league average of 38 percent.

-- Even though A.J. Whatshisname isn't on this team anymore, I still don't like the White Sox.