Well, at least he still has his arm.

Share All sharing options for: Even Fastballs Now Hate Frenchy

Jeff Francoeur is struggling, again. After getting an extension after his breakout age 27 season, Jeffy is back to his normal self, performing horribly. He is hitting .243/.284/.350 which is well below the league average of .258/.326/.420 for left fielders. His major problem has always been plate discipline, but in 2013 it as been exacerbated by his inability to hit a fastball.

I know I may be preaching to the choir. Most fans probably know Frenchy has pathetic plate discipline. I just want to show the dredges he has reach so far in 2013. Some times it is tough to tell the difference between smelly poo and make-you-nearly-throw-up smelly poo.

Frenchy has been known as a first pitch fastball hitter. He has always struggled against breaking pitches (or any pitch in the dirt). After watching a few games this season, it seems fastballs have been his kryptonite. He just has not been able to catch up and make contact with fastballs. Now it is time to look at a few pitches. Each video are of fastballs right down the middle of the plate.

The first swing and miss happened on April 21st.

Just a bit late. It was not really fair for him though. The pitch was over 94 mph. Here is a pitch just under 92 mph right down the pipe.

Well, not much better. Let me slow it down some more. This one comes in at 89 mph.

Closer. At least the glove wasn't closed with the ball before the bat went over the plate. Additionally, he missed two slower fastballs, but they were cutters. Frenchy is pretty dead meat against any breaking pitch, so they were unfair. Here is is Swing and Miss percentage for fastballs since 2008. 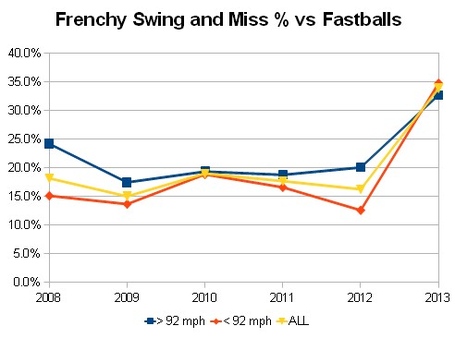 Frenchy did perform a few baseball related activities well. Now, it looks like another one is all but disappeared, the ability to hit a fastball. Now, he is even more abyssal at the plate. At least he still has his arm cannon, for now.