How Ned Yost cost his team the chance to win on Tuesday.

Another heartbreaker in Baltimore on Tuesday as the Royals rally to tie the game after a rain delay and then see the Orioles plate the winning run in the eight against Luke Hochevar.

Who's up for some good, old fashioned second guessing?

Ned Frank Yost went with Hochevar in the eighth because Matt Wieters has struggled against right-handed pitchers. A switch-hitter, Wieters hit .197/.263/.310 versus righties before Tuesday night's game.

While Hochevar may have owned the platoon advantage, everyone knows how he struggles with men on base. Whatever the reason, it's a real issue. It's a small sample, but while Hochevar entered the game with a sparkling 0.84 ERA, he had inherited two base runners and allowed both to score. That came early in the season against Toronto when he was brought into the game with runners on and two outs in the inning.

In fact, Tuesday was the third time all year, Hochevar had entered a game mid-inning. It was the first time he entered with one out.

When he made a throwing error on the pickoff attempt on Adam Jones, you knew how it was going to end. The next pitch was a low fastball that was down the heart of the plate. It wasn't a bad pitch being low in the zone, but he caught too much of the plate. Wieters, just trying to put bat to ball, looped it down the left field line in a fine Eric Hosmer imitation and brought home the winning run. 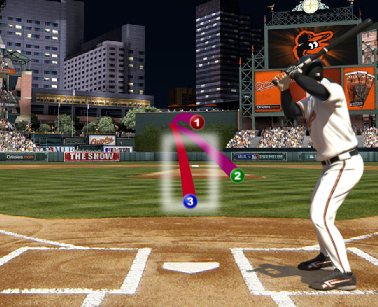 This is an opportunity for second guessing. Why Hochevar in that situation? How about Aaron Crow? He was on Yost's pregame shortlist for ninth inning pitchers. Wieters has struggled against right-handers and Crow has been very successful against left-handed hitters since 2012. This year, he's allowed one hit and one walk in 13 plate appearances from the left side. Not bad.

Or if you insist on a right-hander, but JC Gutierrez hasn't appeared in a game since April 28. I know he's the proverbial "final" spot in the bullpen, but if you're going to let the guy collect cobwebs, maybe it's best to just scrap the whole eight man bullpen and get yourself an extra bat for the bench. I know Gutierrez wasn't (and shouldn't be) a real option in this situation. I just wanted to point out his existence. Maybe he has family that reads this blog. They would like to know he's safe.

While I question using Hochevar in the middle of an inning, I also question using him in a tie game. He's entered games with the Royals down two, up nine, down two, down one, up seven, down eight and down two. He hasn't been trusted with a lead or tie game all year. He's merely been tasked to eat innings or keep the game close. His average Leverage Index is .27, second lowest in the bullpen. Only the aforementioned Gutierrez is lower.

It's bad managing to use Hochevar in that situation.

While we're on the topic of the bullpen, why leave Tim Collins out to start the eighth? He was struggling with his command all through the seventh inning. He threw 15 pitches. Six strikes. And it wasn't close. 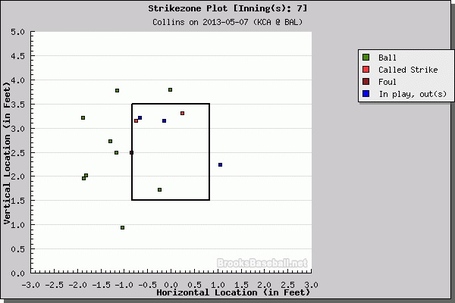 Plus, his pitches that found the strike zone were elevated. He was living dangerously in the seventh. Lucky the Orioles didn't hammer him in that inning.

My feeling is the right play is to go to

In the ninth inning, Yost let Jeff Francoeur leadoff the inning. Again, why? In this situation (down one) you need a run. (Obviously.) This team is devoid of power and Francoeur is hitting .215/.253/.316 against right-handers. It's not just the platoon split that was favoring the Birds. The Oriole closer Jim Johnson throws his fastball an average of 93.5 mph and is throwing the pitch over 75 percent of the time. And as Jeff showed us yesterday, Francoeur is really struggling against fastballs.

To me, the right play would have been to put George Kottaras at the plate. Kottaras has some strange career platoon splits where he hits for more power against right-handed pitching but reaches base more often against lefties. Still, you have to favor his chances over the out machine known as Francoeur. If Kottaras reaches, then you have Jarrod Dyson pinch run and all hell breaks loose.

This second guessing is all well and good, and none of this guarantees the Royals would have won the game. However, I'm a firm believer the manager's role is to use his assets in a way they have the best chance of success. Yost put Hochevar in a position he's proven he can't handle and sat on his hands when he could have improved his club's chances to at least put a man on base with his team down a run. Players need to execute, but if the manager doesn't make the proper moves to leverage the situation, the responsibility falls on the manager.

In this case, Yost has to take the blame.