Season long with no signs of change.

I continue to remain fascinated by the season Eric Hosmer has had at the plate.

Entering the game last night, Hosmer had 235 plate appearances and was hitting .276/.333/.346. Just a stunning power outage from the player who was going to be counted on to hit around 25 home runs and be a consistent source of pop from a corner infield position.

Here are his top five outcomes:

A 30 percent ground out rate? Whoa.

In fact, Hosmer is putting balls on the ground at a prodigious rate. His current GB/FB ratio is a whopping 3.34. This from an alleged power hitter. Or rather, a potential power hitter.

For a frame of reference, here is a complete list of player who have a GB/FB ratio greater than 3:

That's not exactly the type of company you want your potentially power hitting first baseman to keep. Hey, at least Hosmer has the second most extra base hits among this quartet. He's just six behind Cabrera for the lead!

Compare his spray chart to his rookie year. For fun, I ran the data from his debut to July 4 of 2011. He accumulated 232 plate appearances in that stretch, comparable to where he was prior to Tuesday's game.

And here were his five most frequent plate appearance resolutions through that stretch in 2011:

Groundouts were topping the table, but he's hitting nine percent more this year than in his first taste of big league ball.

The differences between the spray charts are stunning. Gone is the player who hit for power and who could pull the ball. I don't have the data, but I don't think I'm going out on a limb when I speculate the majority of those green dots in right field came from grounders bounced between first and second.

From Jeff Zimmerman's Heat Maps site, here's how Hosmer has been pitched this year: 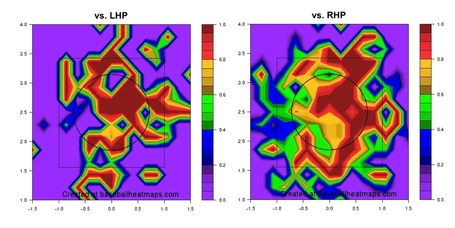 My untrained eye (I'm not that close to the dirt. I'm barely off my couch.) tells me Hosmer has lost bat speed. He's swinging at hittable pitches that he should drive to right and either fouling them off or is late and taking them the opposite way. We've always celebrated Hosmer's opposite field power potential, but when over 75 percent of home runs are hit to the pull field, Hosmer's complete inability to drive the ball to right has resulted in this power outage. I suppose it could be about pitch recognition, where he's slow to recognize pitch type and it drags his load time, but that doesn't seem to be the case. The fact he can go with the pitch on the outer half seems to indicate he isn't fighting recognition issues.

Sure, Hosmer has excelled in the brief time he's been in the computer generated second spot in the order. Prior to Tuesday's 0-4 performance, he was hitting .381/.458/.476 in the six games since the move. (One of those games he hit fifth.) Small sample size and all that, it's a positive start. However, since the start of the month, Hosmer's ground ball rate has actually increased. Over 67 percent of all balls he's put in play have been on the ground. The high batting average and on base percentage mask the larger issue. The issue that's not going away. Hosmer has completely lost his ability to pull the ball and to hit with power.

We've discussed the George Brett interim hitting coach hire, but Hosmer to me is the real acid test. Whatever Seitzer, Maloof, et al did to Hosmer over the last 18 months completely wrecked him. The damage needs to be undone. Quickly.