Run prevention and the Royals defense

Royals defenders have helped the pitching staff keep runs off the board this season. Can it continue?

Share All sharing options for: Run prevention and the Royals defense

As you have likely heard, the Kansas City Royals lead the American League in ERA. Even though it's still early in the season, it is a nice accomplishment for the pitching staff, the coaches, and the front office that assembled those players.

Unfortunately, the defensive-independent pitching statistics are not as kind to the Royals pitching staff as ERA. Below is a table consisting of the Royals ERA estimators and their league rank (heading into Thursday night):

ERA makes the Royals pitching staff look like the best in the league, but the estimators suggest that the pitching staff's run prevention skills are average at best.

In theory, an average pitching staff isn't necessarily a problem. For this Royals team, which has battled some serious inconsistencies on offense which don't appear to be going anywhere (despite last night's extravaganza), average run prevention ability would likely keep the team from climbing back into contention.

A pitching staff is not the only factor in a team's ability to prevent runs; defense matters. To show this, I compiled the previous five seasons of each MLB team's ERA subtracted from their FIP, then plotted the E-F against Fangraphs FLD value, which includes UZR, pitch blocking, and catcher caught stealing. The graph, plotted below, suggests that a good defense is somewhat correlated with a team out-performing their FIP. 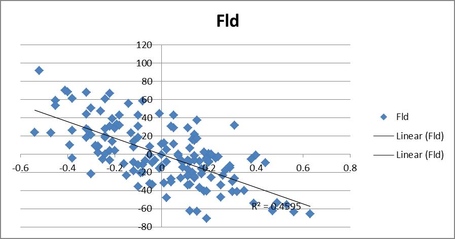 The graph is not perfectly linear; there are other variables that effect run prevention, and defensive statistics are admittedly imperfect. Still, there does appear to be a relationship between the quality of a team's defense and their ability to out-perform their peripherals. This is not a ground-breaking notion, but it's still nice to see the evidence support what we suppose is true.

The 2013 Kansas City Royals have out-performed their FIP the most out of any team in the major leagues. The Royals also have the highest FLD value in the majors, and most other advanced defensive statistics suggest the Royals have been the best defensive team through 40% of the season.

It seems like the Royals PR Machine has talked about the team owning one of the best defensives in the AL the past few seasons, without the Royals actually playing particularly impressive of defense. They can certainly advertise the defense right now without a guilty conscience, as the statistics finally caught up with the message. Below are some defensive stats, as well as the Royals AL rank in all of them.

Baseball Prospectus are the only haters, but even their version of Defensive Efficiency rates the Royals defense as above-average.All the other defensive statistics grade the team's defense as the best so far in the American League.

Kansas City has been balanced defensively, rating near the top of most of the components that factor into these statistics. The Royals lead the AL in outfield arm runs and are tied for first with the Boston Red Sox in range runs. The team is also fourth in double play runs.

While it's great to see that the Royals have played such impressive defense, it's more important to figure out whether than can they can play at a similar level for the rest of the season and continue to help the pitching staff out-perform their FIP.

I created a table comparing the 2013 UZR/150 of each non-catching position* player to their career average UZR/150 to show how much each player has contributed to the overall team defense this season, and see if we can expect this level of defensive play moving forward.

David Lough, Elliot Johnson and Miguel Tejada have not logged very many innings at the respective positions that they play in Kansas City, so their career UZR/150 number should be regressed heavily towards the mean when projecting future performance.

Every Royals position player except for Jeff Francoeur is on pace to save the team runs with their defense. The only outlier in the group is Eric Hosmer, who has performed well above his career UZR numbers so far this season.

Hosmer could finally be developing into the above-average fielder that many scouts expected he would, but I want to see a lot more data before feeling comfortable with that conclusion. For now, I would project Hosmer to play below-average defense moving forward, but there's a chance he has at least made some progress defensively.

Even if some of the position players will not continue to play Gold Glove level defense moving forward, almost everyone on the team can be reasonably expected to play average to above-average defense. Some players might regress while others might improve, but the defense should still help the team prevent runs.