A wild pitch saves the day.

Share All sharing options for: Royals lull Indians to sleep, then strike

This was setting up to be a brutal loss.

Carlos Carrasco was dominating the Royals. Granted, we know the Royal bats and all the issues. They haven't gone away. Yet when facing a pitcher of Carrasco's ilk, you expect something. Anything.

And the Royals were held without a baserunner through the first 4.1 innings of the game. It was Lorenzo Cain to open the Royals hitting account. (After several jinx-worthy Tweets from yours truly.) You would think that maybe things would start happening. Especially as they saw Carrasco for the second or third time of the night. Except they managed just three more hits.

Meanwhile, James Shields was scuffling through six innings. Don't take scuffling as a pejorative. Shields didn't have his best command, walking four, but he was able to get the key outs when needed. The only damage was on a Carlos Santana home run to lead off the sixth.

Then it all happened.

A single, a sacrifice and a lineout and it looked like the Royals would squander another opportunity. Then a little Eric Hosmer bloop to no man's land in shallow center and the game was tied.

That just set the stage for a bizarre ninth.

A Billy Butler double and a Lorenzo Cain walk had runners on with no outs. David Lough bunted. It was a good bunt, but the Indian pitcher couldn't keep his footing and Lough was on first without a throw. Bases loaded with no outs. This is always an uncomfortable time for us as Royals fans. How many times have we seen this situation and failed to score a single run.

Thankfully, Matt Albers was keeping the ball in the dirt and it skipped between the legs of Santana. Wild pitch and a run.

Yet there was still time for things to descend into the bizarre. Like a Chris Getz intentional walk. And Alcides Escobar laying down a bases loaded bunt. I speculated Escobar did this on his own. In his postgame, Ned Yost said that it was a called play. Third base coach Eddie Rodriguez gave Lorenzo Cain a "verbal" call and Cain apparently missed the cue. Forget all the missed signs. Why bunt in that situation? All we need is a flyball. Granted, Escobar isn't swinging the bat with any kind of confidence, but still. Just put the bat on the ball and see what happens. That's Yostball for ya.

A couple other notes:

-- Here's how this game looked if you played it on a computer:

-- Escobar laid down a sac bunt attempt in the eighth but didn't really bother to run out the play. Terrible lack of hustle.

-- Same for Moustakas in the fifth.

-- Speaking of Mike Moustakas, it may be all about confidence, but if the manager doesn't have confidence to hit him with the game on the line, what exactly is he doing here? Time to farm him out and replace him with the first person who can get to Kansas City.

-- I particularly liked the progression Holland had on Mike Aviles. Low, low and low before uncorking a 99 mph* fastball up. Swing and a miss. 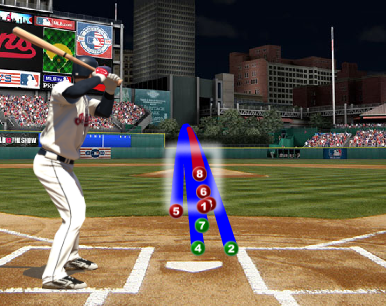 This team is so bizarre. There's just no way they're this good. They're averaging four runs per game during this stretch, which is right in line with their seasonal average. Yet, they're allowing 2.1 runs per game in June. Yes, 2.1 runs per game over their last 16. There's no way this is sustainable. But I can't remember seeing a team go through stretches like the Royals. I can only hope the forthcoming correction is gentle.