A new and improved Hosmer?

He's finally decided to pull a few balls to right. Is this a trend that will continue?

Share All sharing options for: A new and improved Hosmer?

Eric Hosmer is having himself a solid month. After taking the collar (0-5) on Sunday, the Royals first baseman is hitting .306/.355/.471. A solid small sample performance. More importantly, he's clubbed nine extra base hits. That's one extra base hit fewer than he hit in April and May combined.

To my untrained scouting eye from the couch, it looks like Hosmer is loading his hands a bit earlier and is able to finally turn on the ball. He's always had a nice, relaxed swing. It looks like he's keeping his hands inside and finally driving through the ball. It also appears he's recognizing pitches a little better. He's not missing hittable pitches as much anymore. He was always good at covering the outer half of the plate, but his improved load time and keeping his hands in on pitches on the inner half mean he's finally getting out in front of some pitches and taking the ball to right. Since 75 percent of home runs are hit to a hitter's pull field, this is a very promising development.

My dime store scouting aside, the results say he's on the right track. Brooks Baseball has really stepped up it's game of late and now has loads of information on hitters. The Hosmer page is a great look into his season.

If you've visited here for any amout of time, you know I'm fascinated by Hosmer's spray charts. After a 2012 season where it appeared he tried to pull everything, the pendulum swung way in the other direction this year. Here's his spray chart from April: 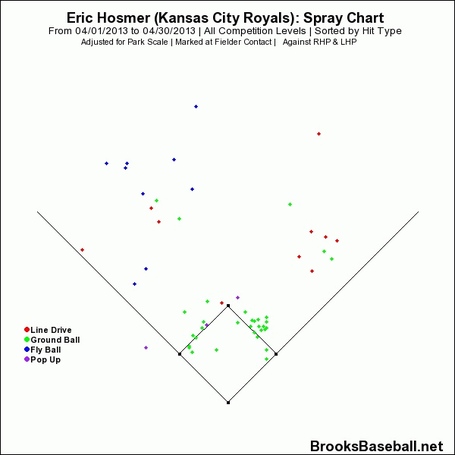 The spray charts I had been using didn't have classifications of batted ball type. Now we can see and it confirms my suspicions. Hosmer hit only line drives and a couple of grounders to the right side last April. Of course, line drives are ideal, but for an alleged power-hitting first baseman to go a full month without hitting a single fly ball to his pull field... That's a cause for concern.

May wasn't much better. 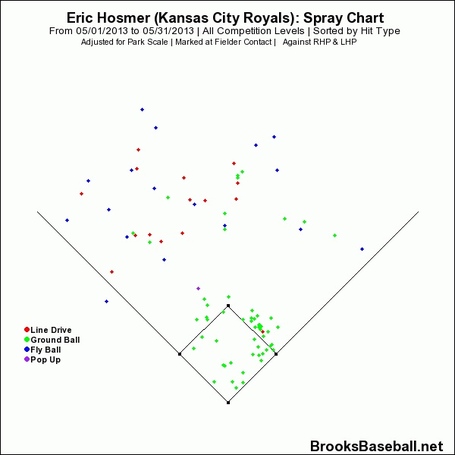 I asked for a few fly balls to the pull field and I got them, but the line drives completely dried up. And the fly balls weren't exactly threatening the wall. You can't have everything, I guess.

It's not difficult to look at those two spray charts and get down on Hosmer. He was doing fine with pitches on the outer half of the zone, but there were plenty of hanging off-speed pitches and 3-1 fastballs he was completely missing or grounding to second. The Royals offense stunk through the first two months and Hosmer was a huge reason. When you're garnering comparisons to Ross Gload, I start searching under the kitchen sink for Draino.

Things changed in June. Thankfully, I put the Draino back. 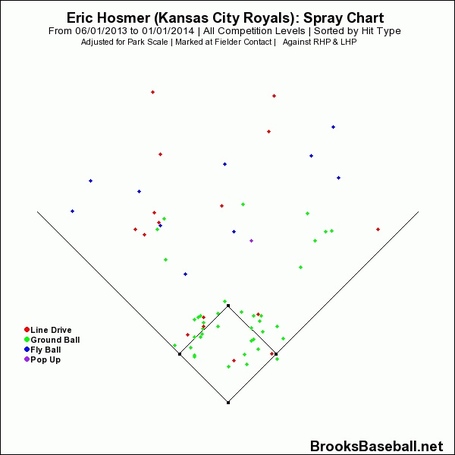 Much better. That's a spray chart to get excited about. Line drives everywhere. Deep fly balls. Finally. There are a few more red dots on the infield which is a nice slice of evidence he's squaring up to the ball. These are outs, but they're hard hit outs. He has some line drives to the gaps and a few fly balls to his pull field. Unlike the flies in May, these are deep.

Is he fixed? I'm not going to go that far. Brooks has a spray angle chart where they plot the pitch type - classified as hard, breaking or off-speed - and where it lands on the field. 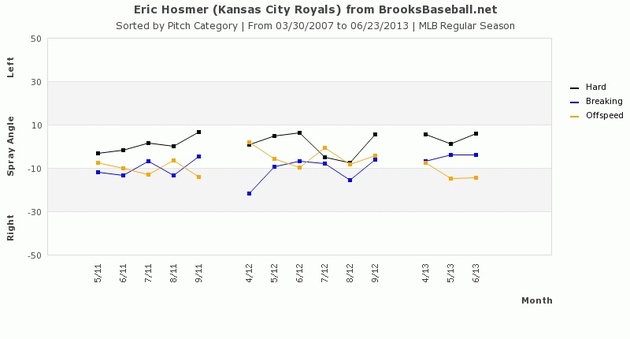 Interesting. Hosmer is still going to left on the hard stuff quite often in June. When I look at his career, I suppose the proper placement for batted balls on fastballs would be what we see from his first four months in the majors. In those months, he was fairly up the middle with a slight bias toward left on fastballs and he was pulling most other pitches. Nothing extreme, just healthy. He's not there, yet. But the spray charts hold some promise.

One final chart: His results. 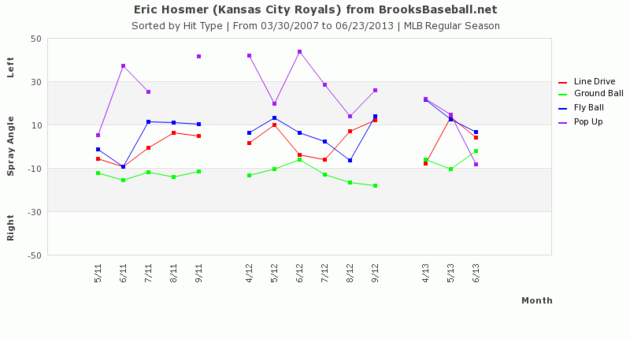 He couldn't pull a fly ball back in April, but he's slowly trending in a positive direction. He was pulling his line drives in April, but seemed to have lost his way in May, but he's working his way back in this category as well.

There are some positive trends in these charts, but he's been scuffling for so long, I need to see more than three weeks of good data before I declare Hosmer fixed. He's still hitting ground balls 58 percent of the time in June and his monthly GB/FB ratio is at a still-elevated 3.33. He needs to put the ball in the air a little more, but thankfully, he's started driving those fly balls and line drives a little further this month.

I'm not as down on Hosmer as I was three weeks ago. Maybe it is the George Brett Effect. At least now I'm hopeful he can take his performance this month and continue to move forward. This offense needs him. Badly.