Looking at the box score from Wednesday's walk-off win against the Braves, something jumped out at me.

Since you clicked on the title of this post, I think you know where I'm going with this: 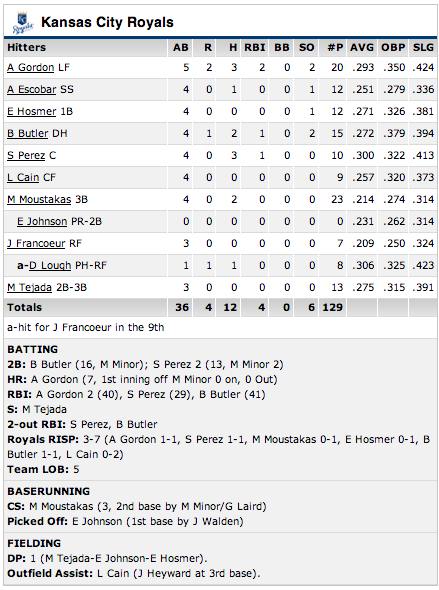 For the season, the Royals are averaging 3.79 P/PA. That is fourth from the bottom in the American League. We know the Royals don't have plate discipline and part of their low number of pitches seen was due to Braves starter Mike Minor, who throws strikes.

I know there's this perception the Royals swing at a ton of first pitches, but that's not accurate. They offer at the first pitch in a plate appearance 23 percent of the time. League average is 27 percent and the Royals mark is lower than every team save Minnesota and Boston.

As far as last night's game, it just seemed like everyone except Mike Moustakas (who had at least a two ball count in every plate appearance), Billy Butler and our hero Alex Gordon was intent on taking their rips. This isn't breaking news. This is our team. Jeff Francoeur saw seven pitches in three plate appearances and then David Lough pinch hit for him and saw eight pitches in a single PA. Lorenzo Cain has been scuffling and saw just nine pitches in four plate appearances.

Here's how the Royals have done as a team:

Three regulars are better than league average. Two of them are the Royals best hitters, who arrived here ahead of General Manager Dayton Moore. Moore, of course, will tell you it's experience that gets you plate discipline. OK.

There a myriad issues with this offense. Lack of plate discipline is just one. Thankfully, they overcame that issue on Wednesday.