Share All sharing options for: Awww, jeez - Royals Royal against the Twins

Don't say I didn't warn you. This Sam Deduno kid is Koufax incarnate.

He's now thrown 19.1 innings against the Royals and given up just two runs.

The Royals are now 1-11 when scoring one run or less. How about that for a number?

It helps when the guys are going up with a swing now, ask questions later philosophy. 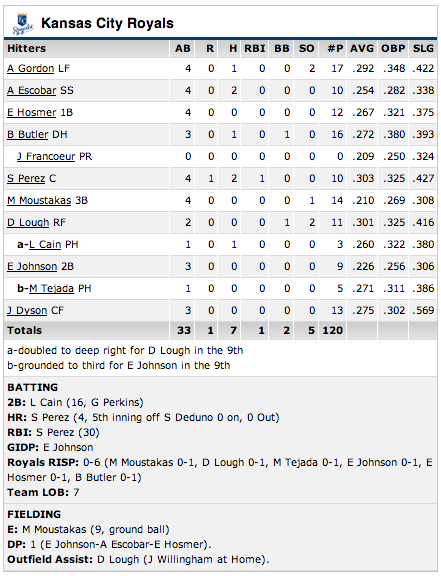 They saw 3.42 pitches per plate appearance on Thursday. The funny thing is, through the first six innings, Royal hitters swung at their first strike only twice. You would think this would allow them to work the count. You would think wrong.

Four times the Royals put the first pitch of a plate appearance in play. Alcides Escobar, Eric Hosmer (twice) and Billy Butler. Only Butler got a hit.

Jeremy Guthrie did a decent job. In 111 pitches, he got just four swing and misses, but limited the walks and was hurt by poor fielding.

Was he the bright spot? Salvador Perez got two hits, including a home run. Will Smith did well coming out of the pen. I don't know.

Believe it or not, on a night like tonight, I like to find something that was a positive from the game. But on Thursday, the game was just kind of blah.