Royals Take On the Evil Empire Once Again

Sure, most of the Yankees we all like to despise are nowhere to be found, but still....Yankees!!!!

Share All sharing options for: Royals Take On the Evil Empire Once Again

Wade Davis is throwing the ball harder....sometimes. Take a look: 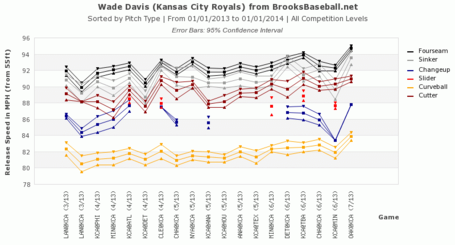 Or is he? Three of his four 'fastest' games came at home under the friendly warm eye of Kaufmann's radar gun. Also, as we have discussed in the past, Brooks Baseball, from whom the above chart comes, has struggled to categorize Davis' change-up. Does the increase in fastball velocity correspond with better classification of Wade's other pitches?

I don't know, but charts are fun and pretty to look at, so I put one in this preview.

What we do know is that Davis was pretty good his last time out, going seven innings against Oakland, striking out eight and walking just one. That was nice to see as the outing before was a hideous five walk, two strikeout debacle in which Davis did not record an out in the second inning.

That bad, bad start came on the heels of three six inning or more starts in which Davis had struck out 15, walked 5 and allowed just two runs in each of those three starts. Checking the video machine and running some numbers, that means Davis has been solid in four of his last five outings.

Davis did pitch against New York on May 10th and gave up seven runs in five innings. He has a career 5.01 ERA versus the Yankees in 41.1 innings.

Opposite the Royals' number four starter will be Ivan Nova. That's eight letters-two names for those of you scoring at home. Nova is making his seventh start and eleventh appearance of the year. Since notching 16 wins as a rookie in 2011 despite suspicious peripheral numbers, Nova has upped his strikeout rate to nearly one per inning, kept his walk rate in check, but developed a tendency to allow the long ball.

The Yankees will send out this lineup of legends:

The Royals will counter with: